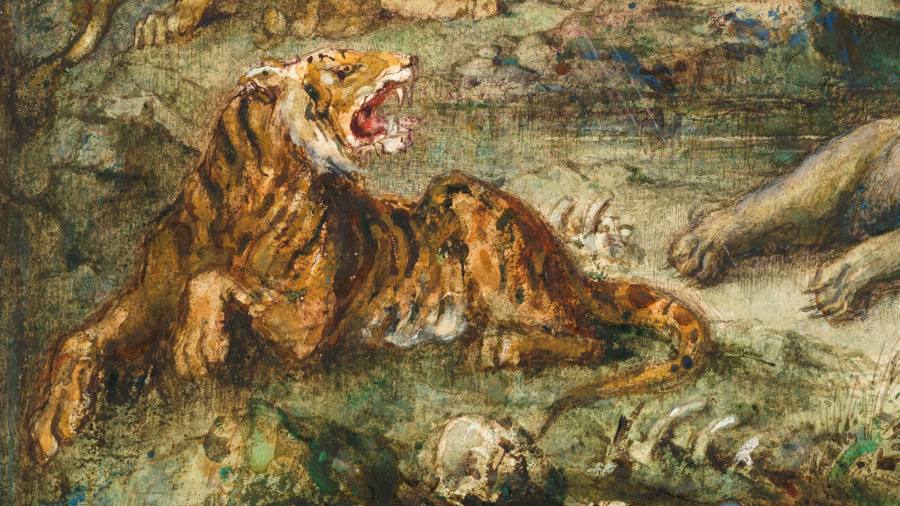 A fairy tale wrapped in a fairy tale: this is the summer exhibition Gustave Moreau: The Fables at Waddesdon Manor. The convergence of fantasies is perfect: the resplendent watercolors and gems of the French artist of animals endowed with human expressions and gestures in romantic settings were created in 1879-85, at the same time as Waddesdon, the false castle. Renaissance in a beautiful park in the English countryside. , was under construction to house Baron Ferdinand Rothschild’s dizzying array of decorative items. Both are precious, deliciously escapist, backward-looking, full of pathos – and brimming with social history.

Echoes are heard in the house and the gardens. The peacocks strutting and squawking in the park’s beautiful ironwork aviary match Moreau’s silky rainbow-tailed bird asking for a better voice in “The Peacock Complaining to Juno”. A rococo musical elephant in gilt bronze by Rothschild parallels the great swaying beast with its cargo of wealthy travelers in “The Rat and the Elephant”. Through its meanders, the baron dotted classical statues originally intended for Versailles; at the same time, Moreau painted nudes pale and smooth as marble in strange scenarios, riding on a hippogriff with indigo wings in “Allegory of the fable”, conjured by a magician to stand in front of a gold and turquoise Byzantine palace in “The Mouse Turned into a Girl”.

All this has a quality of awakening Sleeping Beauty in a castle: on loan from a private Rothschild collection and not found in public since 1906, the watercolors are fresh and luminous, while preserving a frozen moment.

Moreau, a Symbolist artist known now, if at all, like Matisse’s teacher, was renowned in his day for his brilliant hues, compared at the time to those of a jeweler who, “drunk with color, had crushed rubies. , sapphires, emeralds. , topazes, pearls and mother-of-pearl to make his palette ”. It lasted: the insect in a touch of brilliant white gouache against the bleeding and dripping oranges and reds in “The lion and the midge”; the gilded frames, the scarlet and green morocco bindings and the brilliant blue porcelain of the antique dealer of “Le Coq et la Perle”.

The first impression of the paintings is their luster and sparkling detail; then comes their scope of human and cultural interest. The illustration commission from Jean de La Fontaine Fables, a 17th century French classic, adapted dreamy, retired Moreau; the astonishment is that in fleeing the stress of the urban intellectual life of the late 19th century, he expressed so many of his vital currents of thought, bending La Fontaine’s timeless truths and morals with allusions to revolutionary politics. , Darwin, colonialism, changing attitudes towards women.

The first impression of the paintings is their luster and sparkling detail; then comes their field of human and cultural interest

In “The Frogs Asking for a King”, the amphibians who wave their legs like hands in protest upon discovering that they have introduced a chief about to devour them – the slender but vicious crane already hangs a bloodied corpse of his beak – are a commentary on tyrants and their blind subjects, relevant to worried post-revolutionary France, but also to today’s populist regimes. Moreau drew his gesticulating, glassy-eyed animals from live models released into his garden each week, but he brought back memories of the traumatic Paris Commune of 1871, an anti-government uprising.

Few of Moreau’s irresistibly credible creatures are innocent of any political connotation. The snake from “The head and the tail of the serpent” heads towards a liquid underground world of striated ruins reminiscent of the Paris City Hall destroyed by communal violence. The proud hero with the overturned trunk in “Jupiter’s Elephant and Monkey” was drawn in the Jardin des Plantes from an animal called Bangkok, saved from slaughter when other elephants were slaughtered and eaten during the siege of the Franco-Prussian war; For the French public of the 1880s, Bangkok symbolized endurance and survival. The satire of power is just from “The animals struck by the plague”, where the big beasts sacrifice an honest donkey, depicts a lion modeled on Brutus, who came from the Sudan; his presence at the Jardin des Plantes symbolized French global influence and colonial power.

La Fontaine mingled Greek, Roman, Persian and Indian sources, inspiring the orientalist impulse which is one of Moreau’s transgressive charms. A figure clad in opulent robes and a turban reclining on a couch in “A Mongolian’s Dream” is framed by moonlit minarets and oriental domes. The femme fatale, auburn hair as skin, jumping from her astonished lover’s bed to hunt a rat in “The Cat Turned into a Woman” is exoticized and made less threatening by the lamp-lit Moorish decor. Delacroix is ​​a fundamental influence; Matisse’s odalisques are announced.

Essentially nostalgic, fantasy feeds on underlying currents responding to the fear of change. While the impressionist innovators Renoir and Monet produced festive and luminous canvases of the wide luminous boulevards of Haussmann which transformed old regime Paris in a modern metropolis, regressives like Moreau hated it. “Le Cordonnier et le Financier” is “a scene of mud and rain in old Paris,” he explains: narrow, dark cobbled streets, the shoemaker in his hovel, a dog pissing against a guard stone, a medieval turret.

For “The city rat and the country rat”, the most sparkling of all watercolors, Moreau represented decorative objects in enamel and crystal from the Louvre collection to evoke a Louis XIII extravaganza of ceramics, glass, of ironwork and textiles piled up. Rodents run over these sumptuous surfaces. At the sign of danger, the warned city rat rushes to a golden bottle cooler, while the frightened provincial rat is pinned to the ground under the majolica tabletop fountain, one paw still on the pie, upright body and white forehead. hairy incongruous with splendor. La Fontaine is satirical; Moreau sympathizes with animals.

The theory of evolution, questions about the ability of animals to feel or think, are also in Moreau’s mix. The gleam in the eyes of “The Miser and the Monkey”, one picking up coins under his fingers, the other mischievously leaving them one by one in his hand by the window, implies parallels between man and man. monkey. “The monkey and the dolphin” operates at a more acute and modern pace: the monkey, hitchhiking while telling stories about its importance, is surprised by the dolphin, who “throws it back into the water. to drown and go looking for someone he considers worth saving. ”Whispering lies, screaming in fear, the monkey, with his mouth wide open revealing the muscles of the tongue as well as teeth, has an intensely human gaze, one thinks of the gaping and terrified mouths of Francis Bacon, of men and apes.

The fabulist glittery world of Moreau delights and captivates, surprises and reveals. The Gustave Moreau museum in Paris simultaneously presents the preparatory sketches, some of which are presented for the first time this summer, before the exhibition moves there in the fall; the superb English catalog, reproducing the watercolors and their studies, is a work of art in its own right.

To pursue @FTLifeArts on Twitter to discover our latest stories first

Hart grad will study at Oxford

Hill of Bolcoff: the heart of Branciforte