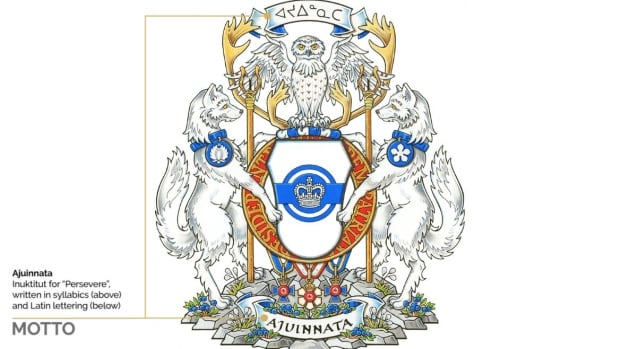 Rideau Hall on Friday unveiled Governor General Mary Simon’s coat of arms — ones she says reflect her personal story and commitment to reconciliation.

Simon grew up in the Inuit community of Kangiqsualujjuaq in northern Quebec. Prior to her appointment as Governor General, Simon was a journalist, civil servant and diplomat.

In a press release, the Office of the Governor General said his coat of arms is a symbol of Simon’s northern upbringing, heritage and career as a diplomat.

“This crest is my story, my true story, and it speaks to my lifelong commitment to building bridges and family, and my hopes for a future where we respect each other and share each other’s stories to help foster better people-to-people relations,” Simon said in the press release.

Chief Herald of Canada Samy Khalid, who is responsible for the official coat of arms, said in the statement that Simon’s coat of arms is “simple in composition and, at the same time, extremely complex in meaning”.

“It’s a personal crest that serves a public purpose. It illustrates how heraldry can express many layers of a person’s identity in a structured yet creative way,” he said.

Simon is the first Governor General to have a coat of arms with a motto in an Indigenous language. “Ajuinnata” is an Inuktitut word meaning “to persevere” or never give up.

“This motto inspires its own journey and embodies its message of hope to young people and to all Canadians facing adversity,” the statement read.

A description of Rideau Hall’s coat of arms states that the motto is “a guiding principle for [Simon] and an indication of his hopes for the truth and reconciliation process.”

The shield is white – a color which, according to the description of the coat of arms, is meant to represent reconciliation, as well as the snow and skies of the Canadian North. The crown symbolizes Simon’s role as the representative of the monarchy in Canada.

The shield is shaped like an amauti, a traditional parka worn by Inuit women.

A horizontal line in the center of the shield represents “Simon’s pioneering career in Inuit and circumpolar affairs”, while the surrounding disc and circle represent “an inclusive relationship between Indigenous peoples and all Canadians”.

The snowy owl is believed to symbolize wisdom, agility and adaptability.

“So it alludes to His Excellency’s life experience and diplomatic skills,” reads the description of the coat of arms.

Caribou antlers represent the connection between humans and nature. It is also an important animal in Inuit culture.

Two arctic foxes flank the coat of arms. The animal is “famous for its endurance and long migratory treks,” the description reads. They represent Simon’s “career as a diplomat and advocate for circumpolar affairs”.

The mountain sorrel on the fox’s left pendant is a common plant from the Nunavik region of Quebec, where Simon grew up. The strawberry flower on the opposite pendant is in honor of Simon’s husband, Whit Grant Fraser. The flower is a symbol on the crest of the Scottish Clan of the Fraser and the name is derived from “Fraise”, the French word for strawberry.

Two kakivak harpoons separate the foxes. The spears represent Simon’s grandmother, “who taught him many traditional values ​​and life skills,” the description reads.

Simon enjoys picking berries in his spare time, according to his official biography. The blueberries at the bottom of the ridge represent this hobby. The cottongrass that surrounds them is used to make the wicks of a traditional Inuit lamp called a qulliq.

The coat of arms has unique elements

Khalid said in an interview that a governor general’s coat of arms is usually revealed much closer to their installation date, but the COVID-19 pandemic has slowed the process in this case.

Khalid worked with Simon to design the coat of arms and said he was grateful for the extra time.

“We wanted to do it at this pace this time around, and I think it gave us the opportunity to really develop something very meaningful for His Excellency,” Khalid said.

He said several things make Simon’s coat of arms stand out from those of his predecessors. One is the use of the color white, while another is the Inuktitut motto, which is written in both Latin script and syllabics.

“In this case, what is interesting, in my opinion, is that it is a simple word which is very difficult to translate,” Khalid said of the motto.

Khalid added that the use of three badges is also notable. Most Governors General opt for only one, the Order of Canada.

Khalid said he hopes the coat of arms will help Canadians get to know Simon better.

“Heralds like to say they are storytellers, and there are plenty of details here that will help Canadians learn a little more about the Governor General, her life and her career.”

Dallas Opera’s Hansel and Gretel Serve Up a Visual Feast, for Kids and Adults Too