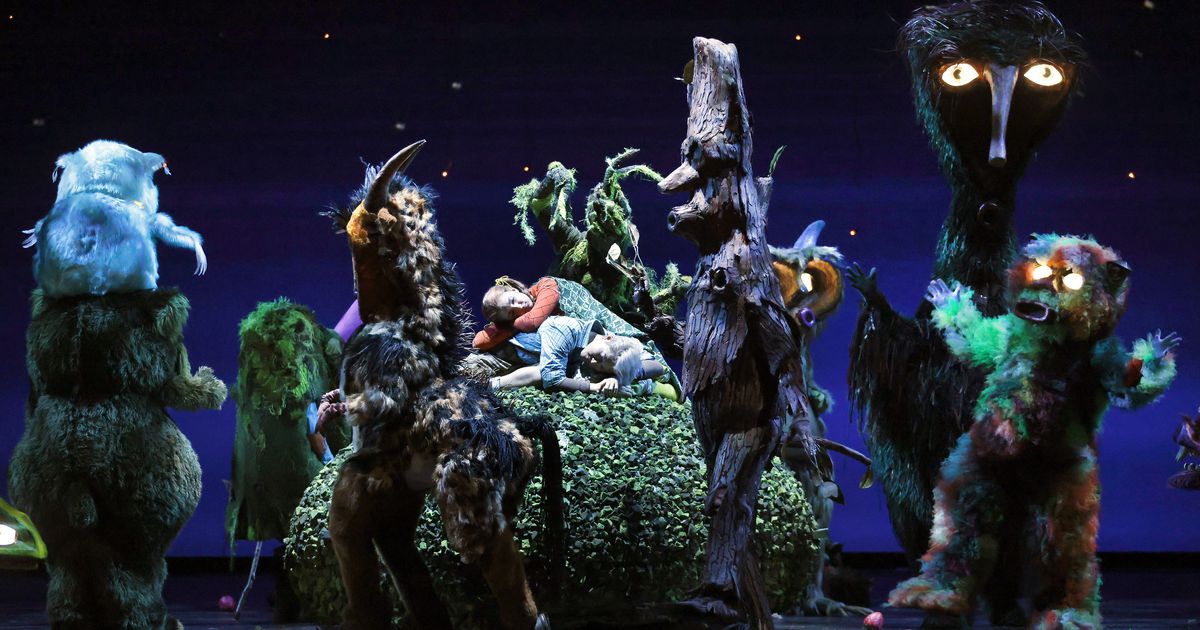 Dallas Opera’s Hansel and Gretel Serve Up a Visual Feast, for Kids and Adults Too

All of these, and more, filled the Winspear Opera House on Friday during the opening night of the Dallas Opera’s production of Hansel and Gretel.

The best-known work of 19th-century German composer Engelbert Humperdinck, it is sometimes considered a frivolity for children. But in this fresh and imaginative production from the Los Angeles Opera, there’s both poignancy and humor, with visual delights for kids and adults alike.

Director and designer of sets and costumes, Doug Fitch brings the fairy tale to life. He assembles an array of magical beings, from waltz furniture to two-legged moving trees and a purple gnome with glasses and a cane. The creatures effectively complete the story, suggesting what many of us imagined as children when we were scared or bored or needed a friend.

The most touching moments of the evening came from the production. Floating above the stage in a golden suit, the Sandman, kindly voiced by Lindsay Metzger, rained glitter on Hansel and Gretel, helping them fall asleep in the woods. The woodland creatures then emerged and danced around, later snuggling around the children, blinking their large, glowing eyes. The children were awakened from their dreams by the dew fairy, sung with charm by Gabrielle Gilliam, dressed in a sparkling outfit on an illuminated and moving decor.

But after eating in a gingerbread house, with a candy cane door and frozen ice cubes, Hansel and Gretel are trapped by an evil witch. Hansel ends up in a giant inflatable costume, but the siblings eventually outwit the witch and turn the gingerbread men into children, who join them in celebrating the witch’s demise. (The children’s choir, from the newly formed group Greater Dallas Choral Societyoffered both refined and lively contributions.)

The production was backed by an excellent performance from the Dallas Opera Orchestra, which sounded anything but a part-time band, despite some intonation issues.

But what about the main characters? Alas, they were a mixed bag.

Typically voiced by a mezzo-soprano, Hansel was sung by countertenor Kangmin Justin Kim, who also starred in At Huang Ruo’s Mr. Butterfly at the Santa Fe Opera this summer.

Review: Despite the Promise, Santa Fe Opera’s M. Butterfly Is a Disappointment

Kim and soprano Elena Villalón as Gretel were convincing in their acting and boyish attire. Their voices blended beautifully into the central prayer duo, but overall they seemed too sophisticated for their parts. I also wanted more contrast between their sounds and clearer diction in the melodic lines.

In another unusual twist, Patricia Racette voiced both the mother and the witch. This gives additional irony to the witch’s phrase: “Come, I humbly beg you, will you join my family?” in the modern English translation by Richard Sparks.

As a mom, Racette directed Hansel and Gretel, but also revealed her soprano’s tender side by expressing her character’s desperation. But a video recording of his face shown on the house did not match the orchestra well.

Later, as a witch, Racette flew on her broomstick, wearing a frilly pink dress and a bright yellow wig. She took a fun and whimsical approach, but her voice was shaking loud and clear.

Mark Delavan wielded a booming baritone as a drunken father, but needed more poetry and coloristic variety. The domestic scenes with mom and dad seemed a bit rushed, even rushed, and weren’t always coordinated with the orchestra. In the same footage, a stray backlight shone annoyingly into the audience. The lighting by Duane Schuler and Eric Watkins was otherwise effective, helping to evoke the different moods and atmospheres.

Senator to Murphy on COVID vaccine rule for schools: Don’t do it