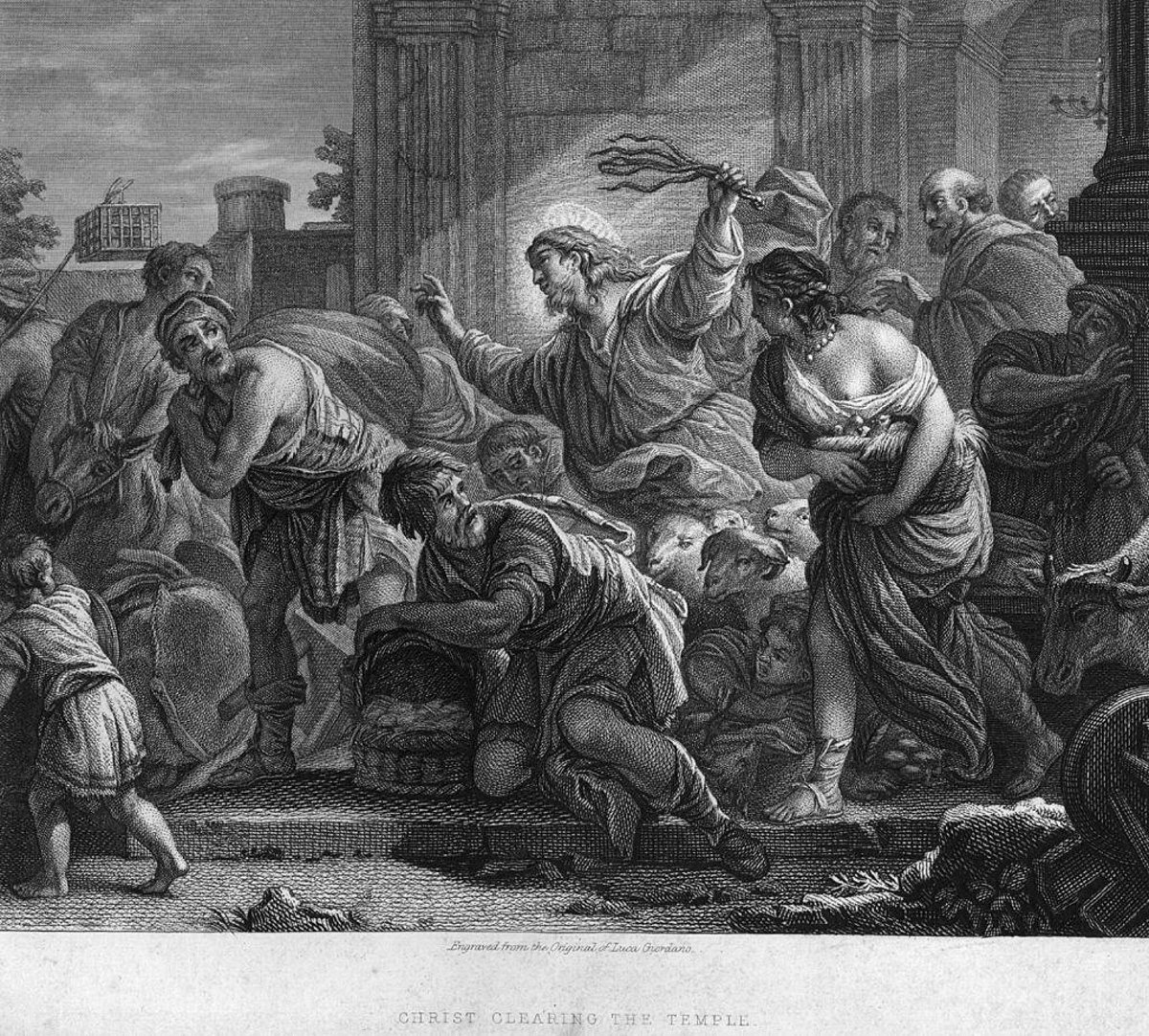 Letters to Readers: Even Christ Knew There Was “A Time to Hate”

Next, Nicola Sturgeon herself learned, or remembered, from reading the Lesson from Ecclesiastes, that in God’s purposes for the good of the world there is “a time to speak” as well as a time to be silent, “a time to hate”. as well as a time to love. Moreover, I don’t think there can be any argument that Jesus really “hated” the lovers of money who deceived the poor when – the Gospels tell us – he overturned their tables and took a whip to drive them out of the Temple which they abused to earn money for themselves and their fellows. Now not only our FM but Christians who are active in all political parties are appalled and speaking out as they can against government priorities that will make the rich richer and the poor poorer. Christian conservatives grappling with the fact that a majority of registered members see this as a solution to the national problem are definitely experiencing this as a moment of hate. even though too many fringe SNP supporters seem to hate all Tories, I found it easy to accept Ms Sturgeon’s clarification that this is not the case. But I remembered and wondered whether the same alert should be given to politicians as was given to me by a man of my present age when, as a new minister, I was knocking on doors in a Dundee Housing Scheme: “You ministers can do much needed fertilizing when you’re scattered, but when you come together you can stink like a pile of dung.

The political scene in Scotland has become somewhat preoccupied with the SNP’s only apparent grape of being – the independence of the 300-year-old Union of Parliaments. The SNP could well be described as a sect rather than a political party.

It is very evident that the leader of the SNP, Nicola Sturgeon, and her closest colleagues have total power over the members. Individual opinion is classified. And whether these seemingly unhappy people believe it or not, they support the splintering of what is generally a reasonably viable economy in favor of what can only be a complete disaster for Scotland and its people. An independent Scotland would simply not have the size or scale of the economy to succeed globally.

The most recent example of the SNP’s arrogance is their insistence that a second referendum on Scottish independence can be held without Westminster’s consent – completely ignoring the fact that the powers granted to Holyrood in under Scottish laws simply do not include constitutional issues.

Such a fate for Scotland must be avoided at all costs. We are certainly ‘better together’ as part of the United Kingdom of Great Britain and Northern Ireland. This was the message at the time of the 2014 Referendum and it still applies strongly!

While Alexander McKay (Letters, 13 October) ignores the Scotland Office’s annual British propaganda expenditure and laments the expenditure (comparable to a single year of SO funding) in a referendum which the Scottish government was elected to organise, the UK National Audit Office has published a report estimating that £4.5billion has been lost due to fraud and error in the rollout of Covid-19 job support schemes alone.

This huge and utterly irresponsible new waste of public money by the UK Government represents a loss to Scotland of nearly £400million, which does not include Scotland’s share of the tens of billions of pounds lost because of the purchase of bad or even corrupt PPE and the ineffective tracking and tracing system. This latest revelation of the British government’s financial incompetence, though largely unreported, is more than enough to cover the cost of building two advanced but delayed ferries, the budgeted expenditure for the referendum and the establishment of representative offices of Scottish businesses in every country in the world if that’s the case. desired.

Will Mr McKay or others who are constant critics of Scottish Government spending now add an objective balance to those criticisms, because at the time of writing we still remain in a so-called Union, although a increasingly dysfunctional “partnership”. Or is it just wishful thinking on my part?

Mary Thomas still seems to think that a separate Scotland would fit into international organizations without a problem, conveniently forgetting that it takes two to tango (Letters, October 13). As for the EU, she fails to mention that the candidates demand to control their own monetary policy, to have their own currency, a functioning central bank and a lender of last resort. Scotland would have none of that if it left the UK. Ms Sturgeon says she cannot put a time limit on when to use the pound and set up a new currency, and prove its stability over several years, which the EU requires.

Scotsman Letters: Government should tighten their belts like King Charles

The toxic effects of awakening are not limited to our universities, as awakened scholars set the curriculum for our schools.

Shakespeare’s plays are part of the heritage of every English speaker in the world. They should be an essential part of every child’s education in this country. Amazingly, it is possible to go through our education system without being introduced to a single Bard piece.

If anything, the position is worse in history, which equates to little more than slavery, the (bad) British Empire, and WWII. Even brilliant graduates have never heard of the Norman Conquest, the Renaissance and the Reformation.

Without knowledge of the chronology of British and European history, or its pivotal events, our literature, our arts and the processes that led to individual freedom are a closed domain for our young people.

This is, of course, entirely intentional, as a people without history and without pride are reduced to a demoralized mob, which the awakened utopians intend to turn into something else.

The catastrophic economic events of the past few weeks have also highlighted a fundamental democratic problem that future governments must address to prevent such a chaotic situation from happening again. the job, but those on the far right in her party who supported her were rewarded with positions in her cabinet. It was a cabinet of friends and supporters chosen as a reward and regardless of experience, knowledge or ability. We therefore have ministers whose excessive ambition is inversely proportional to their ability, whose ideological fervor exceeds any pragmatic approach to the needs of the country’s economy. With the IMF, the Bank of England, every respected economist in the Western world and even swathes of his own MPs urging a change of direction, Truss and Kwasi Kwarteng think they know better than all of them. But Truss has absolutely no mandate to launch these reckless and ridiculous policies on a population already struggling financially with the effects of Brexit. Neither she nor Kwarteng has the skills and economic knowledge to impose such difficulties. When this corrupt and incompetent Conservative government is finally removed from office, it behooves the next government to ensure that the elevation of people who are not up to the job of high office, without political office, elected by a small group of party members, can never reproduce again. The national economy is too important to become the plaything of fanatical ideological fanatics.

When even King Charles greets Liz Truss with “Oh my God. Oh dear! It’s time for the rest of us to feel like we’re not in safe hands with this Tory government in Westminster. Wealthy Tory donors, whose money is safe overseas in tax havens, may not feel the pinch, but ordinary people will use their savings to keep their families warm and fed this winter with no obvious relief in sight for many years to come.Many pensions will not increase with the inflation and those of us who expect a comfortable old age will receive an unpleasant shock.Workers and families will live on soup and bread with the end of mutton soup made to last with lots of potatoes. For treats, there’s always baked beans in tomato sauce on toast, and maybe a sausage..

I was here. I didn’t like it. I had thought that I had worked hard enough not to have to do it again. Now I am anxious and annoyed. My meter shows the effect of rising energy prices, no matter how careful I am.

If we were independent from the rest of the UK, we wouldn’t have raised energy prices. We would have a warm Christmas and a tree with fairy lights. We would be free from an incompetent government whose Brexit and tax policies have made the UK an international poor joke.

Independence is no longer an option for Scotland. It is an urgent necessity. I am grateful that the government we elected at Holyrood is now doing its best to achieve this.