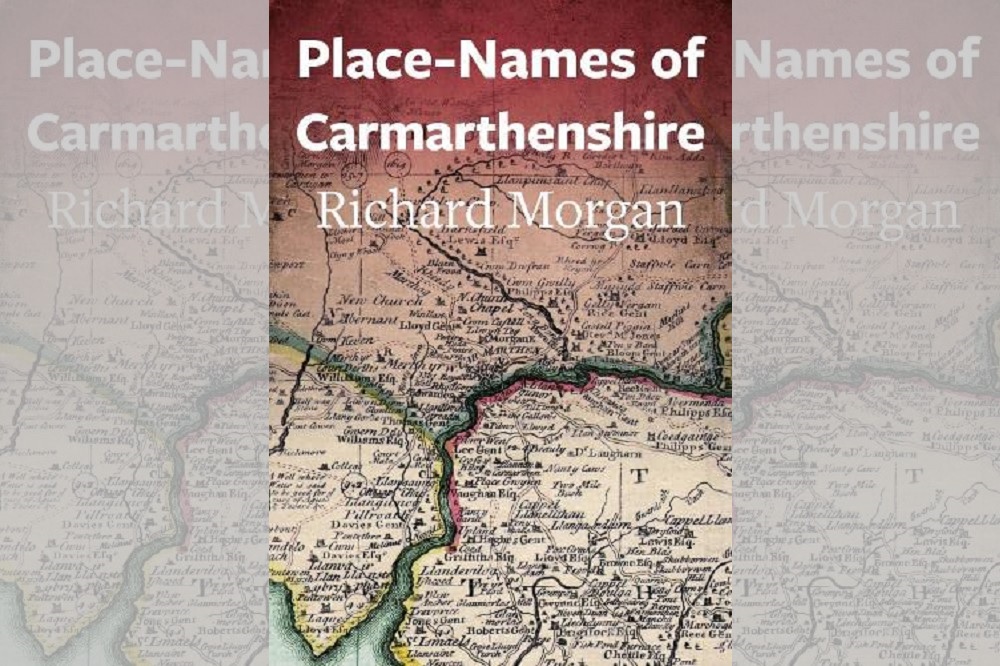 It’s hard to calculate how many long hours it took to compile this collection of place names, but they were all very useful.

For not only did the former archivist Richard Morgan retrace the history of a wealth of names, but he also underlined their value, amassing a veritable treasure trove of history, culture and language.

When barely a week goes by without hearing about acts of cultural vandalism where Welsh names are replaced with English names “Carmarthenshire Place Names” remind us of their value not only for finding or representing places, but also as repositories of information and meaning.

As the late Professor Melville Richards says, quoted in the introduction, “Tracing the history of place names sheds a ray of light on how our ancestors lived and how they thought about the visible world around them.

In this book the majority of names are in Welsh, with very few examples of Irish and a small scattering of English names, memorably Halfpenny Furze and Honeycorse, the latter being ‘sweet, sticky swamp’.

Unlike some Welsh counties such as Glamorgan and Pembrokeshire, there is little evidence of ancient Norse, which shows that major Viking activity took place anywhere other than Carmarthenshire.

Such names are, of course, often beautiful in themselves. Just scan a letter of the book’s alphabet and you’ll find what amounts to a found poem: Glynyrhenllan, Gwempa, Gwastade, Gwyddyl and Gwydre and the inexplicable and wondrous Gwidigada. Then there’s Llidiart Nenog, Afon Fanagoed and Maenor Ddwylan Isaf, almost small poems in themselves.

Then there is the flowing beauty of the many rivers, streams and streams that dissect and flow through this rainy county.

There are the large rivers and salmon haunts such as the Tywi and the cockle-rich Llwchwr as well as smaller rivers such as the Sylgen, Cloidach, Gwenlais, Regwm and the Pysgotwr, a si “remarkable for his fishes” that they twist through his same name.

There’s even a Carmarthenshire Thames, although it’s far from a mighty river, but rather an insignificant little stream, taking its place alongside others such as Nant Melyn, the Yellow Stream and a personal favourite, Nant y Dresglen, which means ‘thrush stream (or common thrush) which presumably chirps a little when in full flood.

Indeed, you can have a great time birdwatching in the pages of Richard Morgan’s Book of Names.

You might expect to see a few crows – the Welsh for ‘crow’ being brân’ and there they are, present at Aberbranddu, Clog-y-frân and Cwmdwyfran, two springs whose name probably alludes to ‘their darkness or rapid , plunging “. flight.’

There is a swallow at Nant Gwennol and magpies at a place simply called Piodau near Llandybie.

There are also many other natural references, with native trees such as oak, holly, elderberry, yew and ash represented in places such as Clunderwen, Maenor Tregelyn, Bronysgawen, Capel yr Ywen and Clynennos respectively, as well as a non-indigenous species being Boxwood, associated with an area of ​​Llanelli.

Then there is the presence of the elusive and secretive pine marten, ‘y bele’ in the name of Afon Bele, a river near Cynwyl Elfed ‘in a remarkable area for pine martens’ although it could also do hinting at the ‘leaping and darting’ nature of the river as one of those slinky mammals.

Other animals include hares and deer, foxes, boars and hares and a lone wolf, or “blaidd” in Cefn-blaidd. There is even a donkey in the name of Afon Asen, a river that could have been perceived as being as slow and strong as one.

Given the religious history of Wales, there are naturally many chapel names – nearly ten pages from an area of ​​Llanelli called simply Capel through Capel Crist and Capel Coker to Capel Teilo and Capel Troed y Rhiw – and a plethora of places with names beginning with “Llan” such as Llanddowror, Llanarthne and Llanegwad.

There is a fine explanation for the name Miawst near Llanarthne, ‘miawst’ ‘marking the end of the hay harvest when the animals were released onto the land to graze after’ a campaign event which was presumably marked by festivities that could have happened here.

Many other places in the book are associated with characters such as Pont Abram (with its road connections) Llan-non, Saint Cadog in Llangadog, Henri in Cwrt Henri, Ffynnonhenri and Pont-henri without forgetting Treherbert and Cwm-Miles.

There are also quite a few places that are prefixed with the word ‘gwestfa’ which was a usual payment made in lieu of food rents, so we have Gwestfa Cilfargen, Gwestfa Bleddyn, Gwestfa Rhingylliaid and many more, showing how names commemorate historical traditions as well as, say, physical characteristics.

Some of the names here are just lovely, like Nant Hust, which “is silent or sounds like a hiss”, a stream that seems to grow silent as it rushes.

Carmarthenshire place names is a reference work in which one can immerse oneself happily for a few minutes, or just as well get lost for hours.

Accompanied by a glossary of 1000 toponymic elements, it is a work that allows us to read our way through a county, to understand the names on the map and why they came into existence in the first place.

May they stay there long.

Gabby Agbonlahor – Why didn’t anyone ask her this huge obvious question?