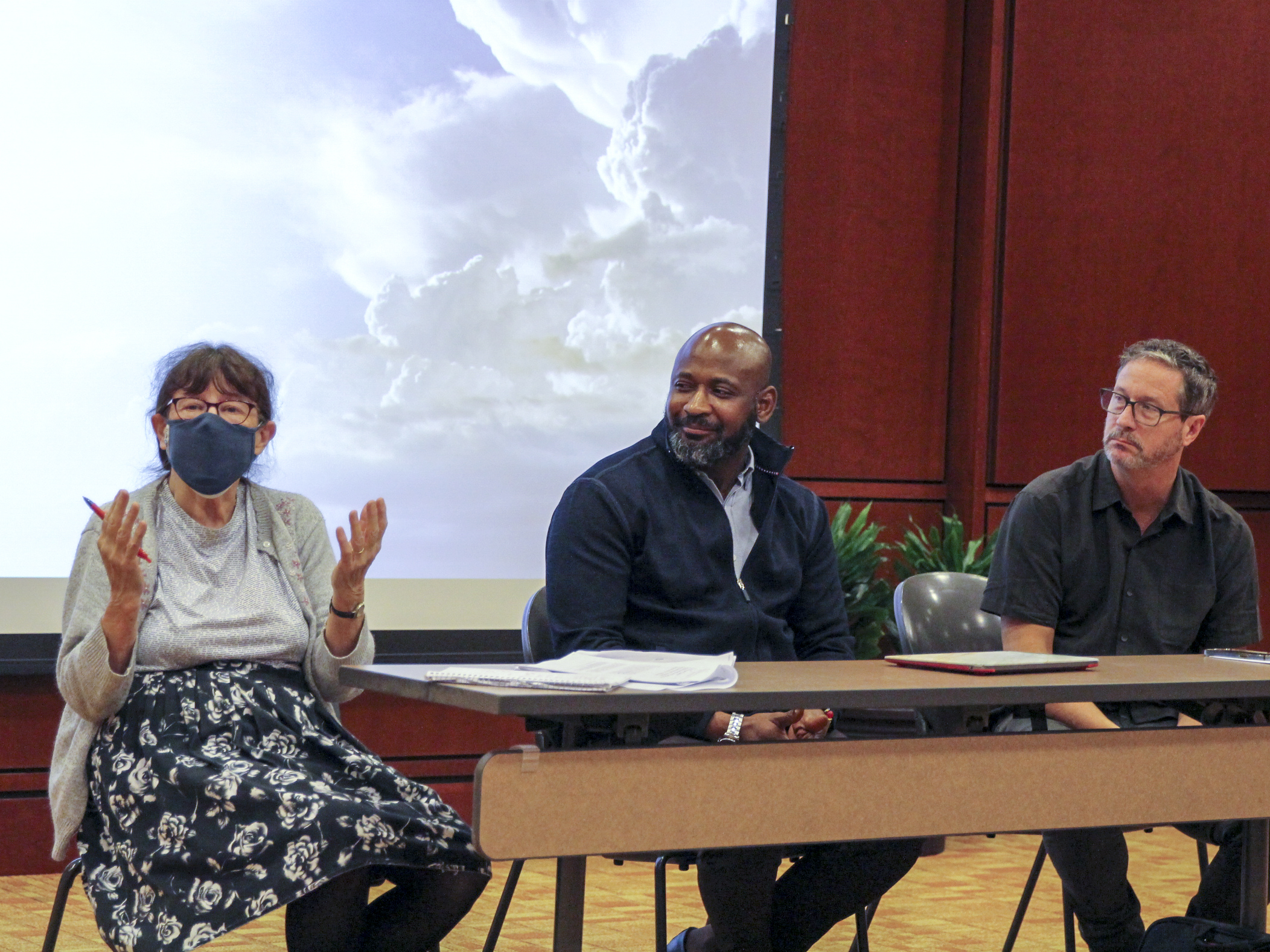 Teachers from the History and Geography and English Departments gathered at the LaRose Digital Theater to reflect on the Queen’s life, global politics and possible futures for the Monarchy, the Commonwealth and Britain’s former colonies.

Three professors spoke about the history and possible future of the British monarchy in the context of the 70-year reign of Queen Elizabeth II during a panel discussion on Monday October 3 at the LaRose Digital Theater at the Koury Business Centre.

History Professor Michael Carignan, English Professor Rosemary Haskell and Assistant History Professor Waseem Kasim examined various aspects of the Queen’s influence in the UK and around the world at a time when the empire Britain was shrinking as nations declared independence or were decolonized as part of the Commonwealth. They discussed the role of the monarchy in government, the Queen’s sense of duty and the exercise of soft power, as well as the history of colonization, violent oppression and exploitation of the British Empire.

“On Thursday, September 8, news spread around the world that Queen Elizabeth passed away. It sparked conversations between teachers about a significant moment not just for England but for people around the world,” said moderator Andrea Sinn, assistant professor of history.

Haskell, who was born in England and emigrated to the United States for higher education, juxtaposed ideas that Queen Elizabeth II would be ubiquitous but of little consequence to British life – “like wallpaper” – with that of a stabilizing political force in tumultuous times and, as head of the Church of England, a religious comfort too.

“She’s seen 70 years of ups and downs,” Haskell said, referring to the conflicts in Northern Ireland, socialist political movements and the coal miners’ strike in the 1980s. United has become much less white, more multicultural, less Christian, more Muslim, more Hindu and less officially religious. She met regularly with prime ministers…and it was useful for the nation to think that she could enlighten and strengthen a politician’s worldview.

Haskell recently reflected on the Queen’s passing in a column, “The Queen’s gift to her people? Modeling the nation’s best self”, distributed by the Elon University Writers Union.

Carignan pointed to the anti-establishment and anti-monarchy sentiments expressed in the British punk and indie-rock scenes of the 1970s and 1980s, particularly The Sex Pistols’ “God Save the Queen” and The Smiths’ “The Queen is Dead”. ” Carignan studies modern European and British history, as well as its cultural and intellectual movements.

“The monarchy was an institution that a generation felt at odds with, including its legacy as an institution representing a rapacious empire that grew rich from slave labor for hundreds of years,” Carignan said.

Kasim dug into this history and legacy of British colonialism and its ongoing effects on now independent states around the world.

“The British became a multicultural, multi-faith society under Queen Elizabeth, but the moment she was crowned she accepted the baggage that came with the monarch,” Kasim said. “There is a false narrative that the monarchy and Britain were the most powerful spreader of democracy and Christianity in the world. It was the opposite. It was a very powerful institution that was violent and exploitative. He perfected the practice of slavery, plunder, murder and kidnapping not only in Africa but also in Asia and the Americas.

The three together wondered how the monarchy and the government of the United Kingdom could begin to right these wrongs through financial or other means.

They also discussed the Queen’s personality and how her long reign shaped public perception of the monarchy. Haskell spoke of a “general affection for the idea of ​​the queen”. Carignan, whose mother is Canadian but has lived in the United States for decades, listened to the death and funeral coverage “because she was my queen,” he said.

Carignan approached the nadir of the Queen’s popularity in the 1990s – after the dissolution of her children’s arranged marriages and the death of former Princess Diana in a car accident in 1997 – a time when Elizabeth’s reluctance II towards public statements damaged his esteem. When she finally acknowledged the national mourning, “it was a turning point in her reputation because she did what people wanted her to do, which was to acknowledge that Diana was a national treasure of some kind.”

They also wondered what kind of leader King Charles III would be and what kind of Britain he would rule. There are hints that he could reveal more of the workings of the monarchy than previous monarchs, that he could be more vocal on political issues and more willing to accept and fix the empire’s past. , they said.

“Throughout history, the moment the monarch dies is a moment of danger,” Haskell said. “Even today is a time of possibility and danger. It could be a time of dissolution if Ireland, Scotland and others declare independence and secede from the kingdom.

My Yom Kippur experience in Germany ‘broke my heart’