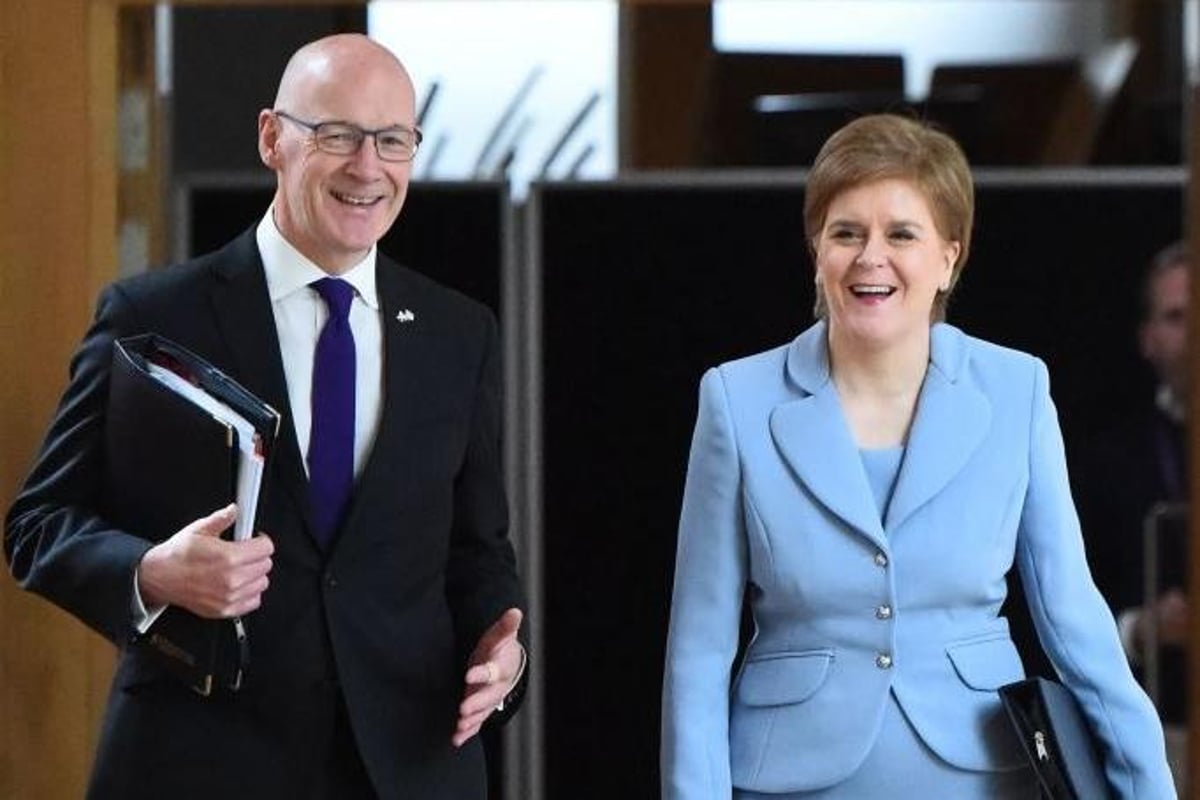 Yet it is despicable. We have a prime minister describing the British government’s economic policy as ‘morally repugnant’ and Deputy Prime Minister John Swinney saying he is ‘very concerned’.

These comments said in a week in which former Scottish Government Finance Secretary John Swinney was unable to quantify the financial commitments made by the SNP administration to the Sanjeev-led GFG Alliance Gupta covering the Lochaber foundry. The auditors resigned, worried about the lack of information available and a possible investigation by the Serious Fraud Office. Additionally, we are now informed that the Ferguson Marine ferries to CalMac are again being delayed with a further increase in costs meaning the final cost of around £300m will be three times the original budget.

The Prime Minister and her Finance Secretary should not be throwing stones from their glass houses and their hypocrisy is staggering and hugely insulting to the people of Scotland. Indeed, one could call it “morally repugnant”.

The breathtaking events of the past few days have even surprised me with the depth and speed of their incompetence. Liz Truss spent many weeks over the summer touring the country and performing in front of the small group of Tory loyalists, pointing out how “tough” she is and how she will make “unpopular” decisions to “shake things up.” ‘economy”. An economy probably weakened by the government of the last 12 years of which it was a part and of which it voted for all the economic measures. And now that she’s painted herself into a corner and is feeling the pressure to enact these suicidal ‘pledges’, it’s become a dead end over whether she’s losing face with her ever-shrinking group of supporters. or if it lets the country continue to sink down the economic drain.

It seems that the warnings of the IMF, the Bank of England, former BoE Governor Mark Carney, the majority of even right-wing newspapers, all the respected economists of the Western world and, significantly, many Tory MPs and councilors are clearly not enough to distract Truss and his friend and Chancellor Kwasi Kwarteng from their hellish desire to wreck Britain’s economy, reward the wealthiest in society and make the lives of ordinary people even more unbearable in the coming years for purely personal and ideological reasons. This crisis is not about political and economic competence, it is about the credibility of Liz Truss and nothing else. Her face rescue is clearly far more important than the country’s economy as she seems to believe that she and Kwasi know more than the most respected economic experts in the UK and beyond. How long can this corrupt and utterly clueless government continue?

We all know there are lies, damn lies and statistics. To this we can add “there are SNP government statistics”. Certainly, the Sturgeon Scheme has shut down school achievement statistics in Scotland, creating what Professor Lindsay Paterson has called a ‘data desert’. However, it is more difficult to abolish statistics on waiting times and medical treatments. The figures are so dire – particularly for orthopedic procedures where, in June 2022, 42,372 people were on the waiting list – that the SNP scheme has revamped its NHS website to record waiting times that are lower than what is actually the case.

I wonder how many hip and knee surgeries the £300m (and growing) wasted on the two Calmac ferries would pay for? Granted, saving £200m off the agreed initial cost of £97m could have saved a lot of people a lot of pain.

“Scots A&E overcapacity all month,” the response to a Freedom of Information request read. The government’s target is for 95% of people to be seen within four hours, but within a week in September only 63.5% actually met the target.

The key is in the title, it’s Accident and Emergency, not “I can’t see a doctor this week so I came to A&E.” In a recent investigation at a local hospital on a Saturday afternoon, there were 58 people in the A&E waiting room, but of these only three were classified as accidents or emergencies.

“Oh no, we can’t do that, we would lose the referendum.”

Yesterday I watched the masquerade of Prime Minister’s Questions at Holyrood. How much longer do we have to put up with Nicola Sturgeon’s evasions, lack of planning, sleight of hand attitude and responses?

She constantly mentions that “lessons must be learned” in response to any criticism of all the failures of her ruling party, but they are never learned and criticism is always deflected by references to English and British government policy.

If she and her ministers could, for once, start working more closely with relevant departments of the UK government and stop hiding from valid criticism of SNP policy and actions, then we could begin to see a properly resurgent Scotland , instead of the vague “jam tomorrow” promises of an obsession with independence that deliberately fails to disclose details.

During the current political and financial turmoil, it must be desperately frustrating for Tories, LibDems and Labor MSPs that they cannot find a way to lay all the blame on Nicola Sturgeon.

Nicola Sturgeon was recently hitting on the Conservative budget that was making the rich richer. That of our Prime Minister who flies across Europe in the blink of an eye to open costly and useless embassies. Who flies to America to be photographed at the Tartan Day Parade in New York. Who is driven all over Scotland in a limo. And who lives in a luxury mansion in an affluent part of Edinburgh. All of the above is at taxpayer expense. I would call it the equivalent of being rich.

Sir Keir Starmer promises to set up a British state-owned energy company to ensure Westminster can steal Scottish energy as he pleases. This will allow his party to prop up failing British businesses and make the Scots pay more than necessary. If we were independent we would pay less for our energy because Scotland can produce enough for its own needs.

If you were a Scotsman, struggling to pay your energy bill, would you vote for a Labor parliamentary candidate rather than a candidate for a Scottish government free to increase and conserve our own energy supplies, so that the less well-off in Can Scotland Stay Warm and Well Fed This Winter? No chance!

I had recently joked with friends like ‘I wonder how long it will take them to want Boris back?’, and Mark Boyle appears in Scotsman Letters yesterday to say just that (September 29).

According to Mr Boyle, Boris was overall very well. I would remind him that it wasn’t quite that. In fact, he was atrocious – so lazy, a liar and incompetent that his senior colleagues, despite the risk they were running, threw him under the bus. You could go quite far in party loyalty, but supporting Boris was a journey they couldn’t take anymore. So we hope that party loyalty won’t be an excuse for not noticing that Ms. Truss is even worse. She can’t fire Kwasi Kwarteng, since he’s just singing her tune. Parliamentary colleagues would take too long to withdraw it. Someone is thinking of something.

The British government’s obsession with privatization and the market has created the economic collapse that is threatening the lives and livelihoods of millions and has made Britain relatively poor and far more unequal compared to the rest of the world. ‘Europe.

Government claims that the private sector provides more value than the public are false. Just look at public sector jobs like nurses, doctors, teachers, health and safety workers and garbage collectors, all high-value jobs that provide services that people want, that they need. need and on which they depend. But the UK government is systematically destroying the public sector despite people wanting more of the services these jobs provide.

So far, Scotland has maintained a healthier public sector than England. Instead of England’s disastrous NHS ‘internal market’, Scotland in 2004 re-established integrated health boards which involve the public in the planning, development and operation of health services. Scotland also has a national A&E system, which surpasses that of England. The UK government is determined to sell off what remains of the public sector, completing the job of asset stripping it began in the 1980s under Thatcher.

Scotland is the last colony left to the Tories to strip themselves of assets in their frantic efforts to prop up the rotten edifice of the British state. That’s why we have to end this union – now.