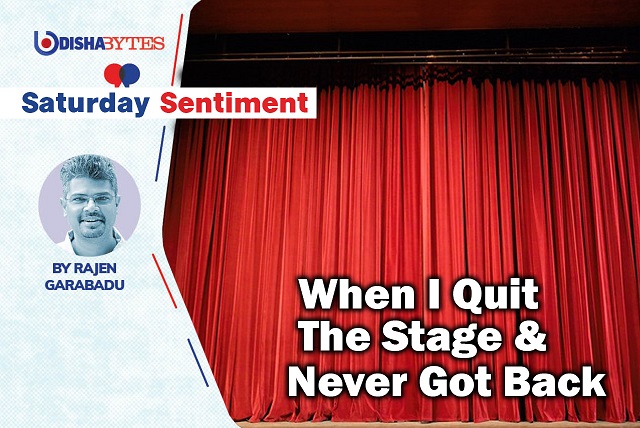 When I left the stage and never came back

Have you ever forgotten your lines on stage in front of a large audience?

Have you been embarrassed, unable to remember even after unsuccessfully digging your brain? When you wished it was a bad dream hoping you’d wake up thanking your stars that it didn’t happen. But you lived the nightmare. And you can’t get rid of it. It shook you. Wrong.

I’ve been there and I know how it feels.

Ashamed, bitter, discouraged, discouraged, embarrassed, etc. I can continue. There are 21 more letters (I’ve used five here) in the English alphabet. And I felt an emotion associated with each letter when I left the stage three and a half decades ago.

I had taken part in an inter-school debate competition. It wasn’t my first. I had participated earlier in intra-school competitions. But this one was different.

The stage was much bigger. And I felt I needed something more to match. I asked one of my teachers to write it for me. Mr. Unger has put his pen to paper; it was magical when i read it. I thought I was one step ahead of the other participants.

Over the next two days, I memorized the lines, as they say, “by heart”. Or so I thought.

My practical lessons in front of the mirror went well. When the day arrived, I tried not to be nervous. But when it was my turn to approach the podium, I felt nervous. The large crowd gathered in the room pissed me off.

I opened the debate with a strong opening line. And then it all went away. I couldn’t remember a line. After a few seconds, not even a word. I made a vacuum.

I tried very hard to remember but to no avail. Discouraged, I made a hasty exit. I didn’t dare look up until I was out of sight.

Although this incident happened 35 years ago, I still recoil when I remember this moment. I remember feeling sheepish for weeks. I never participated in a debate after that. This single episode accentuated my stage fright several times, which was still there but at a subliminal level.

What went wrong? Why did I completely lose the plot? I can think of two reasons:

* The lines were not mine.

* I tried to memorize them.

Neither is a good idea. You need to write your lines in a way that you are comfortable delivering them. This way they are likely to come naturally to you. You won’t have to bang your head later trying to replicate them.

Some have demonstrated success with rote learning, measured in terms of textual reproduction. Not me. I failed. And learned my lesson the hard way. I wish it weren’t so.

Since then, I have always written my lines. I never again tried to reproduce someone else’s words. It worked very well for me. It comes naturally, and I’m more comfortable in my voice. Over time it became part of my style. Now people identify me with that.

‘Be yourself; everyone is already taken.’

Why try to be someone else? You have your own mind. You can think, write and speak your lines. You own them. The sense of belonging will never be the same if you follow someone else’s thoughts or words.

Try it. It can work for you too. So that you don’t have to leave the stage out of frustration.

Letter: Council must define “use of props” | Letters to the Editor