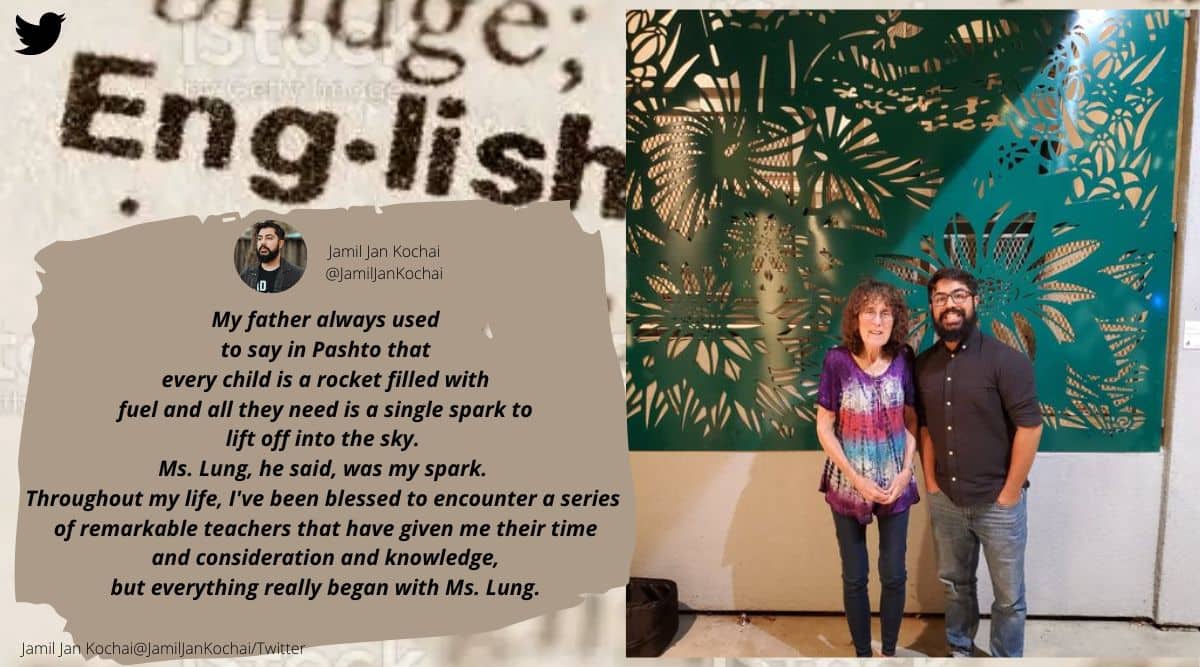 Fiction writer Jamil Jan Kochai who is the author of 99 nights in Logar won hearts online after sharing the heartwarming story of how he learned to read and write English, and about meeting his old English teacher Susan Lung after searching for almost 20 years.

Afghan-American fiction writer Jamil Jan Kochai, who is the author of 99 Nights in Logar, has shared a heartwarming story of how he learned to read and write English. The Pen/Hemingway Prize finalist’s story of how he struggled to live in the United States without being able to speak English, then later met the teacher who helped him learn, during a Reading her book recently won hearts online.

Sharing a photo of himself with the teacher, Kochai told the story in a lengthy Twitter thread. He mentioned that he had been looking for his teacher Susan Lung for almost 20 years. It was Lung who helped him read and write English after he reached the United States.

Let me tell you a story. It’s Susan Lung. She taught me to read and write in a single year when I was 7 years old. I had been looking for Susan, hoping to thank her in person, for almost twenty years. And then she surprised me during my reading last night. pic.twitter.com/7YW2EPx1CO

Kochai was born to Afghan refugees and grew up in a Pashto and Farsi speaking family. He used to be punished by his teacher during his kindergarten years. As his father struggled to work, he attended different schools within a year and then returned to Afghanistan for the summer.

After returning, Kochai completely forgot everything he learned, and Lung came to his rescue. “But I had completely forgotten all the English I had learned at school! I remember on the morning of my first day in 2nd grade, I could only remember 10 letters of the alphabet. I was far behind and on track to be left behind. But then I had the chance to meet Ms. Lung,” Kochai tweeted.

Every day after school, Lung gave Kochai extra lessons and helped him with reading and writing. Later, the seven-year-old boy started winning reading comprehension competitions. However, he lost connection with Lung as his family moved a few times.

“After that, my family moved several times and I lost track of Ms. Lung. For years after, throughout high school and college, I tried to find Ms. Lung, to thank her for everything. what she had done for me. I searched on google and social media. I called my old school and visited,” Kochai tweeted.

Ms. Lung sat with me almost every day after school, giving me extra reading and writing lessons so I could catch up with the rest of the class. By the end of the year, I had learned to read and write, and in third grade, I was winning prizes for reading comprehension.

Kochai added, “The district office. But I kept hitting dead ends. The main problem was that I didn’t know Mrs. Lung’s first name! She had always been Mrs. Lung to me. By my mid-twenties, I had pretty much given up on research. I thought that Ms. Lung had moved on to a new state, a new life. But some…”

My family and I all gathered for the roll call. My parents also wanted to thank Ms. Lung for years. When I finally had a chance to hear Ms. Lung’s voice, tears welled up in my eyes. I told him that everything I had accomplished, I owed him, and that I thought

After years, Lung’s husband connected with him on Facebook and called him. “My family and I all got together for the roll call. My parents also wanted to thank Ms. Lung for years. When I finally had a chance to hear Ms. Lung’s voice, tears welled up in my eyes. I told her that I owed her everything I had accomplished, that I thought of her all the time and that I had been looking for her for years. We all cried that night. Unfortunately, it was at the height of the pandemic and we were still in quarantine at the time. We promised to meet in the future. After that, my wife and I had a child, the Afghan,” read Kochai’s tweet.

My father always said in Pashto that every child is a rocket full of fuel and it only takes one spark to take off into the sky. Ms. Lung, he said, was my spark. Throughout my life, I have had the good fortune to meet a series of remarkable teachers who have

Later, the Afghan government collapsed and he released “The Haunting of Hajji Hotak”. Kochai again lost contact with her. Finally, during a discussion around a book last week, he met her in person. Overflowing with gratitude and joy, he cried and talked to her for a while.

“Years earlier, after ’99 nights in Logar’ came out, someone contacted me out of the blue on Facebook. It was Mrs. Lung’s husband! Apparently Allen Lung heard about an article I wrote for LitHub where I mentioned Ms. Lung. He asked me if I wanted to talk to him that night.