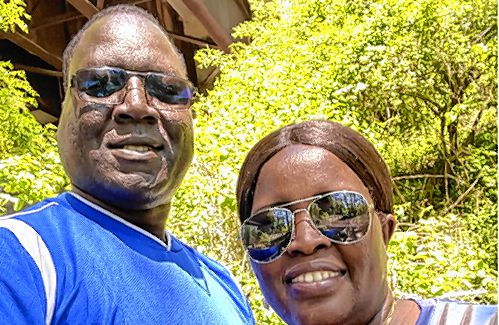 Monadnock Ledger-Transcript – NEW HAMPSHIRE IMMIGRANTS: “You have to prove yourself”

Editor’s Note: This is the third in an occasional series about New Hampshire immigrants, their challenges, and their contributions. More than 48,000 immigrant workers made up 6% of the state’s labor force in 2018, the latest year for which statistics are available, according to the US Census Bureau.

When Nyanit Malual and James Tour arrived at JFK airport in 2003, after a three-year wait and a 12-hour flight from Cairo, neither spoke a word of English.

The person who met them recognized them by the large green and white bag they were carrying, stamped with the letters IOM, for the International Organization for Migration.

She put them straight on a flight to Manchester, where they were met by a woman named Natalie, from the Lutheran Immigrant Refugee Services (LIRS), who took them to a furnished one-bedroom flat on I Street.

She gave them food stamps and came back every week to take them shopping. Rent was free for three months.

“It’s only God who was behind us, how we made it here,” says James.

Natalie helped them find jobs, and later they proudly paid off rent and airfare with their wages.

Native Arabic speakers, they learned basic English in their freshman year in New Hampshire. Although they can rely on the present tense and the grammar can be tricky, they communicate easily.

Now they and their five children live in a three-storey house on the west side of Manchester with a welcoming screened-in porch. James is in his 15th year working in shipping and receiving at Velcro USA. Nyanit, among other jobs, is in her eighth year working at Carlyle Place, helping with dietetics and housekeeping, and has been promoted to Registered Practical Nurse.

Their life has not always been so comfortable.

Originally from Sudan in central Africa, Nyanit and James were newlyweds when war broke out in their village.

“Our villages were on oil,” explains James, “and the Islamic government destroyed the villages. Chinese companies came for the oil.

With the blessing of their families, they fled the war, walking for several days to the Egyptian border, not even carrying a suitcase.

“I took my life, that’s all,” recalls Nyanit. They slept under the stars.

“He sat down and I put my head on his lap,” Nyanit explains. “He is the protector.”

At the border, a train took them and other refugees to Cairo, where they applied for refugee status at the United Nations.

“They have a very good system,” James said. “They give us this form and they send it to the countries (that you request). The United States was our first choice.

For months they lived in a church, sleeping in the sanctuary and doing day labor and odd jobs. The church helped provide food.

As he sat on a street in Cairo waiting to be called in for a day job, loading a truck, perhaps, or cleaning a yard, Nyanit was cleaning or cooking.

“If they are nice people, they take you back to the church,” says Nyanit. “Sometimes you have to take a taxi, you come home with nothing.”

She remembers people throwing eggs at her as she walked down the street.

“They have a lot of buildings,” she said. “You don’t know what building it’s from.”

With money from their work and donations channeled through the United Nations, they rented a room in a campus-style building with a shared bathroom, where they lived for almost three years.

Even when their first child was born, they could not tell their families, who had also fled during the war. Nyanit and James did not know where they were going.

The day James and Nyanit saw their names posted on the church board announcing their interview to be accepted as refugees by the United States, they were overjoyed.

Once here, they were reunited with their families in Sudan and returned once for a family reunion in 2005. Now both send money home.

Since there is no money transfer business in their relatives’ small village, Nyanit and James pay someone in a nearby town to receive the money and travel to the village to hand it over to the family. .

“When we got here they said, ‘You can buy a house, you can do anything like an American,’ James said. But the couple chose another path. With five children to educate, they chose to put them in private Catholic schools.

“That’s the choice we made,” says James. “We have been following this dream for a while now. If we put a child in a private school and try to buy a house, where are we going to find the money for a down payment and the mortgage? »

Two of their children are now at St. Benedict Primary School, one in middle school at St. Joseph’s and one at Trinity. Their eldest, a Trinity graduate, attends St. John’s College in New York with the intention of going to medical school.

Basketball is a family passion. The five children are playing.

James believes exercise is as important as food: “When a child stays active, they get smarter. A good mind in a good body.

“If they have a Tour family member playing, we’ll never win this game,” James once heard the parent of a rival team member say.

“The children’s parents don’t know English,” says Nyanit, “so the children can’t get help with homework.”

GSOP asked for volunteers to manage the program. Nyanit volunteered and ran the homework club for four years. She recently received the group’s Micah Award for Social Justice, Leadership and Community Work.

“Nyanit took such initiative,” recalls Ann, and the students respected her. “’Sit down and calm down,’ she would tell them. ‘You want to eat ? Sit down at the table and shut up.

Ann is impressed with Nyanit and James’ entrepreneurial spirit.

Nyanit works nights and weekends, filling in when the aged care facility is understaffed during COVID. James spends his weekends driving his children to sports games and cheering them on. He and Nyanit take time to walk together when they can.

They are convinced, as James says, that “this is the best country in the world, the best people”. But it takes effort to be successful as an immigrant.

Sometimes, says James, companies only offer immigrants the base salary.

“They think about your English, your background, and they think you don’t know what’s going on,” he says. “You have to prove yourself. You can’t change your mind until you’ve done the work.

Even when he only made $7 an hour, he said, he made more money than people earning $10 an hour because he worked longer hours. And he always made sure to learn his trade. Once, while he was on vacation, the company called him to fix something.

“See how they handle things while you’re gone,” he said. “They feel emptiness. Then you need to ask them for a raise. “

If you know you’re doing your part and not asking for a raise, you’re blocking opportunities for others who come after you, he added.

“You can’t control the other, how they think of you,” James says. “The only thing I can control is how I think about it. It’s what makes us survive.

Advice from James and Nyanit

— Interrogate. If you don’t ask, no one will know you need help.

— Don’t assume that the ways you know and the religion you practice are better than others, or that everyone should follow your culture or religion. “That’s what terrorists and the Taliban do,” says James.

— Accept American culture. Don’t judge based on the actions of one or two people.

— Learning English. “I paid dearly to survive English!” said James. Accustomed to speaking Arabic, and to reading Arabic from right to left, he had to learn to read from left to right in English.

— Obey the laws and respect the police. The police are human; they have a job.

— Challenge yourself to get involved, to be active, to become smarter.

— Be yourself, but pay attention to the people around you. Something as insignificant as a perfume, common in one country, can make others feel uncomfortable. The little things, like brushing your teeth, are important.

— Pay your bills on time.

These articles are shared by The Granite State News Collaborative partners as part of our Race and Equity Project. For more information, visit collaborativenh.org.

Gloria B. Anderson is a former New York Times news director who worked in editorial and international development for the News Services division. Julie Zimmer is a former communications trainer at Kirkwood Community College in Iowa. She is active in the New Hampshire Immigration Advocacy Network. Anderson and Zimmer live in Peterborough. They can be contacted by email at [email protected]