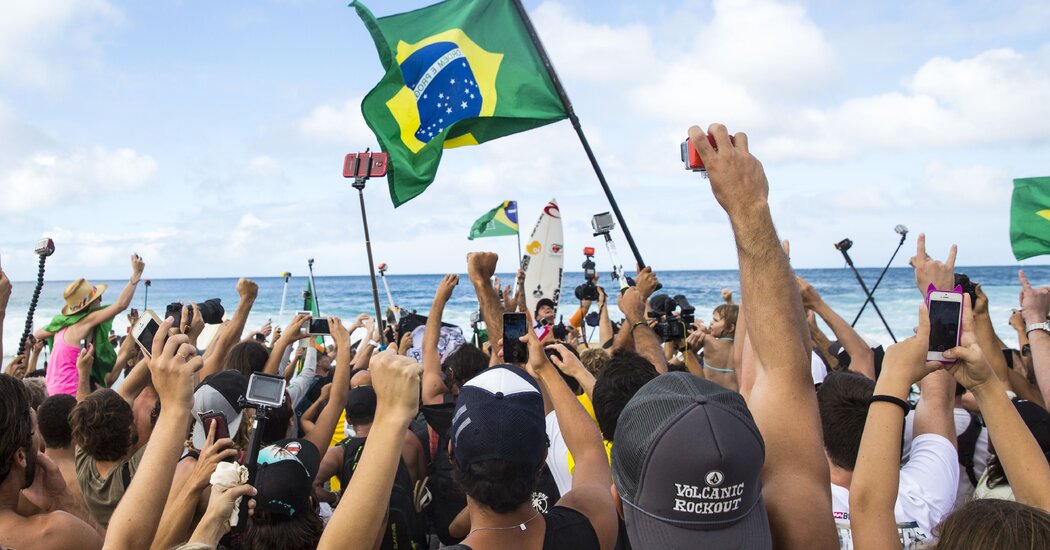 In the blazing Brazilian sun, as he rode through a perfectly chipping wave, pro surfer Filipe Toledo thumped his chest and screamed towards the beach. Toledo, 27, who grew up about 250 miles west of that stretch of sand, had just won his second World Surfing League Championship tour of the year. The victory, in Saquarema, Brazil, cemented his place as the highest-ranked male surfer in the world, and he took a big step closer to winning the men’s world championship.

On the shore, thousands of fans roared. Once again, the Brazilians celebrated the success of a Brazilian surfer, and they were under the spell of a collective triumph.

Just 10 years ago, a Brazilian victory against a list of the best surfers in the world would have been an anomaly. For decades, Brazilians have been the underdogs of the surfing world with few stars. But from the 1990s, a combination of economic policy, a rich talent pool, a system of regional competitions and two men who created a long-term plan to produce the country’s first world champion changed their trajectory.

Toledo first announced his intention to become a professional surfer when he was 6 years old. He dreamed not only of making the elite round, but also of being alongside renowned world champions like the American Kelly Slater, 11 times world champion, and the Australian Mick Fanning, three-time champion. That Toledo – who is known for his ability to launch over the lips of the waves, turn and land seemingly with ease – had such outsized ambition was overblown. The idea that a Brazilian could not only qualify for the tour, but actually win the tour – to beat the Californians, Australians and Hawaiians, who had dominated for decades – seemed far-fetched.

Yes, the young surfer had talent. Like his peers, he started participating in the regional contests which helped the current generation hone their skills and push each other to new heights. He also had the advantage of being trained and advised by his father, Ricardo, a former national surfing champion. And he was earning a lot. But the distance between winning at home against other promising players and winning regularly against the Slaters and Fannings of the world was still impassable.

Brazilian pro surfers “just didn’t have a lot of information or support,” Filipe Toledo said. “They were like, ‘What do I do now? Should I just train or should I take the money that I made from this event and spend it, have a big party or l invest in travel?

In December 2014, the unthinkable happened: Gabriel Medina from the Maresias district of São Sebastião, aged 20, became the first Brazilian to win the world title on the professional circuit. He did it on the last day of the Pipe Masters event. Oahu’s North Shore erupted: Hundreds of people rushed to carry Medina to the podium; others sang the Brazilian anthem; still others waved national flags.

For Toledo and his peers, Medina’s victory was the start of a sea change in professional surfing. After decades of pushing the boundaries of the sport’s top echelon, Brazil have gone from longshot to global giant. Brazilians have won the world championship title in 2015, 2018, 2019 and 2021. Last summer, a Brazilian, Ítalo Ferreira, won the first men’s Olympic gold medal in the men’s shortboard competition. And at the end of June in Saquarema, the the semi-finals were stacked with Brazilians alone.

This generation is so dominant, so undeniable, that it has earned a nickname: Tempestade Brasileira, which is Portuguese for Brazilian storm.

This successful weather system, however, was anything but accidental. It was the result of a confluence of factors: political transformation, economic policy and a decades-long plan to produce not only Brazil’s first world champion on this tour, but also a talent pool to support him. The plan worked.

Surfing has long been part of the country’s culture. In 1976, the year the modern surfing tour began, Brazil got its first taste of surfing glory when Pepe Lopes won the championship’s first event, in Rio de Janeiro.

However, Brazil was still under dictatorship. Its combination of a closed economy, the high cost of travel, and protectionist policies has prevented foreign investment and would-be surfers. Resources were also scarce. Like athletes in other sports, professional surfers need coaches, trainers and equipment. But unlike other sports, the playing field of surfing is ever-changing. To be competitive on the circumnavigation, professional surfers need experience in a variety of waves all over the world – especially the heaviest waves that break in remote places like Hawaii, Fiji, Tahiti and Indonesia. .

This obstacle has not only contributed to a skills deficit among Brazilian surfers, but also to a collective inferiority complex.

Carlos Burle, a Brazilian big wave surfer who grew up competing in his home breaks, said top Brazilian surfers just need enough money to travel the best waves in the world to stand a chance. to be competitive.

It wasn’t until the late 1980s that a handful of men broke through and gave Brazilian surfing a new sense of confidence. Fábio Gouveia, Flávio Padaratz and, later, Flavio’s brother Neco and Victor Ribas were stars who not only made the elite round but also competed against their unexpected counterparts.

Yet Gouveia, Padaratz and the legion of surfers they inspired faced a wave of political upheaval and economic turmoil. In 1985, Brazil’s 20-year dictatorship came to an end, ushering in all the promise of a young democracy. Instead, the country was thrust into the grip of crippling inflation. For surfers like Gouveia, winning competitions was more a matter of financial survival than professional success, let alone a world title.

In the early 1990s things started to change. Brazil’s president from 1990 to 1992, Fernando Collor de Mello, called on a group of scholars to create a set of stabilizing policies, and by the time Toledo was born in 1995, Brazil had a thriving middle class. In the early 2000s, when Toledo and the future Tempestade were surfing their first contests, including a strong circuit of amateur contests, spending on goods and travel (e.g., new surfboards or tickets to Hawaii) was on the rise. rise.

Those conditions were part of what got surfers like Burle up in big wave surfing, a discipline separate from the sport that also requires a lot of travel. In 2009, he won the first ever world big wave title, breaking the Brazilian mold. This would prove to be a prelude to what was to follow.

Brazil’s newly fertile economic conditions began to attract foreign investment and business, including the growing surfing industry. Cuan Petersen, then Oakley’s chief marketing officer, was part of this wave. In Brazil, he said, “everyone surfs”, adding: “We could be in a surf spot in the middle of nowhere and there would be 50 people there.” Petersen teamed up with Luiz Campos, an Oakley sports agent and marketing executive who became the godfather of modern Brazilian surfing.

Following the playbook of how corporations marketed American and Australian surfers, Campos and Petersen created a system to develop and nurture Brazilian surfing talent. They didn’t just want to cultivate surfers who could compete on the world stage. They planned to produce Brazil’s first world champion on the championship tour. In the early 2000s, their program, called Mar Azul, or blue sea in Portuguese, was operational. They recruited young surfers and provided them with physical trainers, coaches, a psychologist, a doctor, English lessons and media training.

“We understand the formula now,” said Toledo, who finished their 2021 season in second place behind compatriot Medina, who won their third world championship.

This formula – the alchemy of economics, opportunity, work ethic and expectation – has driven not only Toledo’s professional success so far, but also what he still believes is possible. . Considering the rest of his season, he only has two goals in mind.

“Enjoy the process,” he said. “And win the world title.”

After June’s Oi Rio Pro competition, his once lofty goal looks a lot less like hubris. Instead, it looks more like a probability.