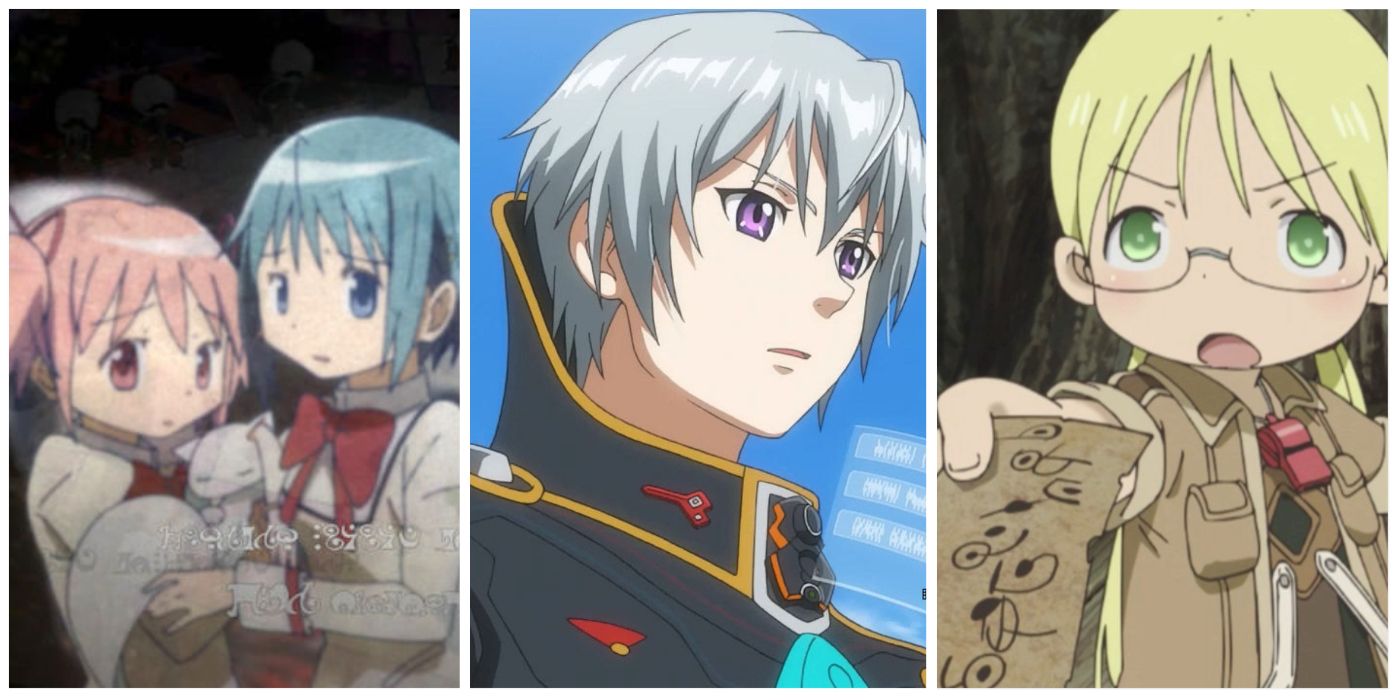 Many anime series are set in fantasy worlds, and as such, they have their own fictional language. Having an invented language can add immersion to a series, as well as more character. It makes it feel like a living, breathing world that has been around long enough to develop its own language and culture.

RELATED: 10 Benefits Of Having A Waifu Anime

Having a constructed language can also have a practical benefit. This eliminates the need for animators to rewrite any in-universe text in different languages ​​for localization. But there can be a lot of work to do to create an entirely new language. Some series have even had their invented languages ​​deciphered by curious and diligent fans.

The characters in Puella Magi Madoka Magica speak Japanese, but there is a writing of a mysterious language that is seen a lot throughout the series in the witches’ labyrinths. Runes look like ideograms, with most having three different variations. Some letter variations may appear completely different from each other. Curious fans of the series have diligently and methodically deciphered the runes through a process of trial and error. They discovered that the runes included quotes from the play Faust by Johann Wolfgang von Goethe.

9 Pokémon communicate by saying their own name.

While humans in Pokemon speak a human language, Pokémon have their own language that only they can understand. With the exception of Meowth, some Legendary and Mythical Pokémon, and a handful of others, Pokémon communicate by saying their own name. It’s a rudimentary language, but they seem to be able to communicate a fair amount of information to each other. It’s based on how they speak rather than vocabulary, with different tones, inflections, and body language used to express what they’re thinking.

8 Orte In Drifters is based on Latin

Drifters is about a samurai who goes from fighting in 17th century Japan to being sent off to a strange new world. In the first episode, the samurai, Shimazu Toyohisa, is badly wounded in battle and is carried down a white hallway lined with doors.

An indifferent man in glasses sends Toyohisa through one of the doors, which leads him into an entirely new world. He is met by two elves who speak a language Tohoyisa does not understand, “Orte”, which is based on Latin. The world is under attack by the Fins, a formidable group of warriors. Other so-called “Wanderers” have arrived in this world, and it is up to them and the inhabitants of the world to cooperate and stop the Ends.

Similar to magic madokathere is also a runic alphabet in Made in the abyss. These runes are in direct correlation with the Japanese kana alphabets. They are first seen on the cover of a book about creatures and artifacts from the abyss in the first episode. The runes lend an air of mystery to the show but essentially replace the Japanese characters. The method of decoding these runes was easier than those of Madoka Magica, as in the opening and ending credits, the names of the staff members are laid on the corresponding runes. There is also the song “Hanezeve Caradhina”, which is sung in an invented language based on Icelandic and German.

In Death March to Parallel World Rhapsody, the protagonist, Sadao, is immersed in an RPG made up of games he was debugging. In order to cast magic spells, magic users chant incredibly fast incantations. While the chants consist of sped-up Japanese syllables, in the anime universe, it takes years of practice to master them. They need the exact rhythm and pronunciation to pitch. Magic spells consist of approximately 100 indistinguishable syllables that have been condensed into utterances of a few seconds. There are four levels of magic spells: Beginner, Intermediate, Advanced, and Forbidden.

violent evergarden takes place in Leidenschaftlich, where people speak the fictional “Nunkish” language. As the titular protagonist is a writer and the premise is based on the letters she writes, there are many sequences of the letters used in this language. The letters of the nunkish alphabet correspond to those of the English alphabet, with some resembling certain letters and symbols. The capital B, for example, looks like an inverted dollar sign, while the capital I looks exactly like the number 2.

4 Entean In The Devil is a part-time employee! Has been changed to the English dub

The devil is part-time! focuses on the world of Ente Isla, which has its own language, called “Entean”. As the anime was written in Japanese, the English writers also had to create their own language. After creating the language, writer Jamie Marchi had to teach it to voice actors and provide them with a vocabulary list so they could use it correctly. The doubled version of Entean was created by keeping the vowel sound of a word but reversing the first and last consonants. The Japanese version sounds like a mixture of Russian and Japanese, while the English sounds vaguely Eastern European.

Ledo, an ensign of the Galactic Alliance of Humanity, is shipwrecked on an ocean-covered planet after an intergalactic battle with the infamous Hideauze. The “verdant planet” the title alludes to is actually humanity’s home planet, Earth, albeit an Earth in the far future. The natives of Earth use a language that sounds a bit like scrambled German.

Ledo’s mech, Chamber K6821, translates Gargantian in real time so Ledo can understand what people are saying. Written Gargantian resembles Romanized Japanese, as can be seen in the books featured in Gargantia on the Verdant Planetincluding The Adventures of Huckleberry Finn.​​​​​​

Namekian is the language spoken by the inhabitants of the planet Namek. It was invented by dragonball creator Akira Toriyama and is loosely adapted from Japanese. Namekian is required to activate certain Namekian technologies, such as the Namekian’s Spaceship. There is also the Saiyan language, and the Divine Language, spoken by deities and Angels. Although this language sounds otherworldly, they are actually just Japanese words spoken backwards. It’s the same with the English words in the dubbing. This way, the creators could have another fictional language on the show without having to invent words or have the voice actors learn new words and how to pronounce them.

“Baronh”, or “Abh language”, is a language created by science fiction writer Morioka Hiroyuki. He appears in the star crest and Banner of Stars anime and movies in the Seikai series and is based on the ancient Japanese language. Morioka also created an accompanying alphabet, Ath. Some of the letters of the alphabet resemble Japanese hiragana and katakana, while others resemble Russian letters. It is perhaps the most complex fictional language in anime, functioning like a real language, with each letter having its own sound and certain combinations of letters having different sounds.

NEXT: 10 Best Shojo Anime That Need A New Season