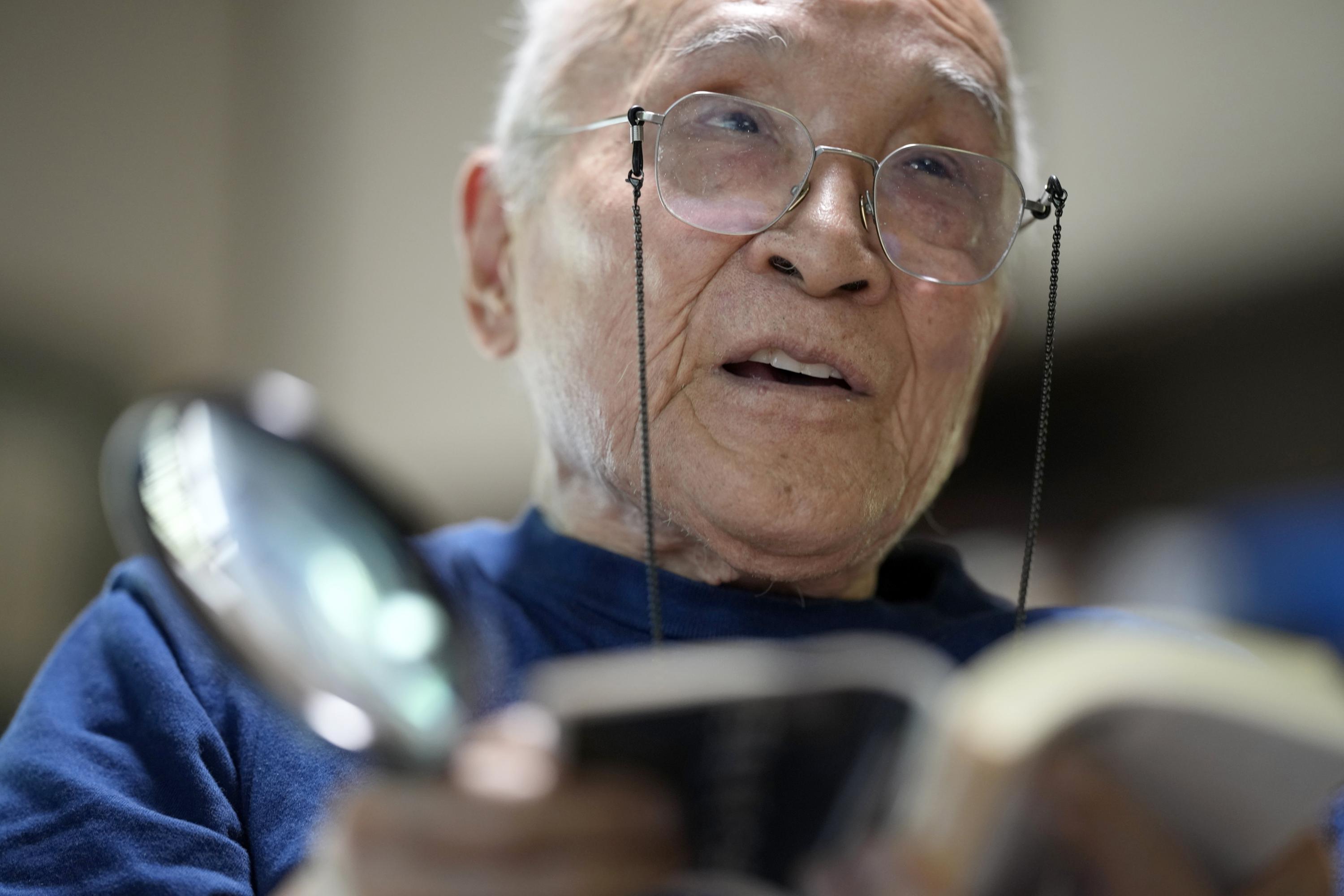 For Japanese star poet Tanikawa, it’s fun, not work, at 90

TOKYO (AP) — Shuntaro Tanikawa used to think poems descended like inspiration from heaven. As he gets older – he is now 90 – Tanikawa sees the poems springing from the ground.

The poems still come back to him, a word or fragments of verse, as he wakes up in the morning. What inspires the words comes from outside. Poetry comes from deep within.

The shelves were overflowing with books. His collection of antique bronze animal figurines stand in neat rows in a glass box next to stacks of his favorite classical music CDs.

“In the past, there was something about it being a job, an order. Now I can write however I want,” he said.

Tanikawa is one of Japan’s most famous modern poets and a master of free verse on the everyday.

He has published over a hundred books of poetry. With titles like “To Live”, “Listen” and “Grass”, his poems are austere, rhythmic yet conversational, challenging traditional, elaborate literary styles.

William Elliott, who translated Tanikawa for years, likens his place in Japanese poetic history to how TS Eliot ushered in a new era in English poetry.

Tanikawa is also a noted translator, having translated Charles Schulz’s comic strip “Peanuts” into Japanese since the 1970s. He has demonstrated his ear for the poetic in the colloquial with finesse, choosing “yare yare” for “good grief”, transcending the differences in lifestyle of East and West into the universal world of children and animals.

“He was more of a poet or a philosopher,” he said of Schulz.

Tanikawa has translated the works of many others, including Mother Goose, as well as Maurice Sendak and Leo Lionni. In turn, his works have been widely translated, especially into Chinese and European languages.

Tanikawa’s poem “Two Billion Light Years of Solitude” shot him to stardom in the early 1950s. Tanikawa had his eyes set on the cosmos and Earth’s place in the universe, years before Gabriel Garcia Marquez wrote the classic of magical realism, “One Hundred Years of Solitude”.

Tanikawa was always in demand, the darling of poetry readings around the world, a rare example of a poet who effortlessly transitioned into commercialism without compromising his craft.

But poetry was a job, his profession, his daily work.

Tanikawa is the lyricist for the Japanese theme song for Osamu Tezuka’s “Astro Boy” anime television series. He also wrote the script for the narration of Kon Ichikawa’s documentary about the 1964 Tokyo Olympics.

A popular author of children’s picture books, he often appears in school textbooks.

He swears that he no longer has “projects” because of his age, which makes traveling and going out more difficult. But in the same breath, he says he’s collaborating with his musician son Kensaku Tanikawa, who lives next door, on what they call “Piano Twitter.”

He has already written dozens of poems to accompany the score. They are all short, more abstract than his past work, evoking surreal images like stairs descending to nowhere, or a caterpillar dancing uncontrollably.

He doesn’t know how the work will be presented, but he speculated that it could become a book with a barcode so that readers can listen to the poems read with music online.

Among his voluminous output, he is most proud of his 1970s “Kotoba Asobi Uta” series, which used singsong alliteration and onomatopoeia, as the title “Word Play Songs” suggests.

The phrase “kappa”, a mythical monster, is repeated, as in: “kappa kapparatta”, which translates to “the kappa took off with something” – a “rappa”, a “trumpet”, as it turns out in a later line. The poetry is, both visually and aurally, a pure celebration of the Japanese language.

It was unique, Tanikawa said, and he still loves what he came up with.

Married and divorced three times – with a poet, an actress and an illustrator – Tanikawa pointed out that he changes with age, noting that 90 feels much older than 80 and he becomes forgetful.

Still, he appeared on a recent sunny afternoon to be completely at ease with social media and everyday technology, despite using a magnifying glass to decipher the fine print. He was curious about new movies, including what might be on Netflix. He likes to eat cookies, he says, sounding more like a mischievous child than the great-grandfather he is.

He usually works at his huge desk in a spacious study, which has a window that lets in the breeze and a blurry ray of light. It overlooks a flowery courtyard. On the wall hangs a sepia portrait of her mother with her father, Tetsuzo Tanikawa, a philosopher.

Growing up, Tanikawa was more afraid of her mother’s death than any other death. He also remembers how he saw corpses on corpses after the American air raids of Tokyo during World War II.

“Death has become more real. It was more conceptual when I was young. But now my body is approaching death,” he said.

He hopes to die like his father, in his sleep after a night of partying, at age 94.

“I’m more curious about where I go when I die. It’s a different world, right? Of course, I don’t want pain. I don’t want to die after major surgery or anything. I just want to die, all of a sudden,” he said.

When asked to read his works aloud, he does not hesitate.

He reads excerpts from his latest collaboration with his son. Then he read his first work which, translated into English, ends with these lines:

So what does he think?

“It feels like a poem written by someone else,” Tanikawa said.

But is it a good poem?

He nods his head with conviction.