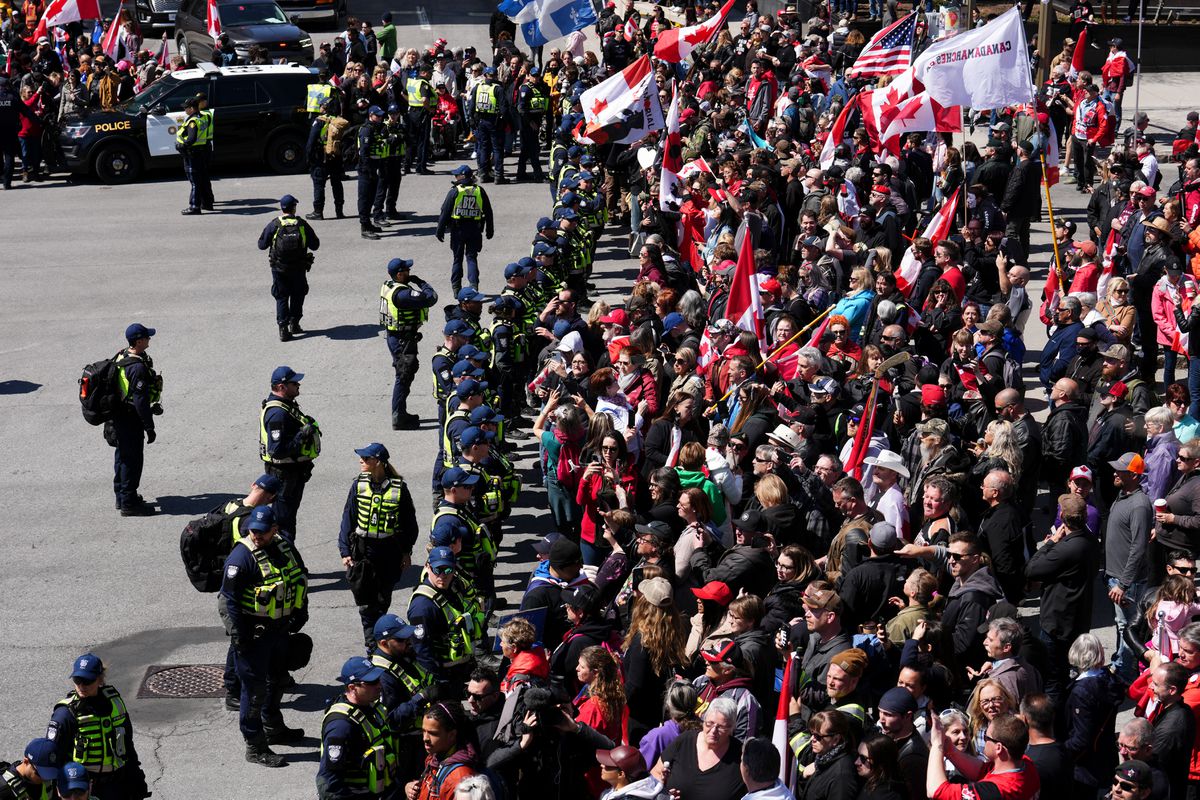 Letters to the Editor: May 3: “Another flashy love at first sight in the name of freedom to protest imaginary nonsense and problems. Ottawa after ‘Rolling Thunder’ protests, plus more letters to the editor

The biker convoy leaves Ottawa after the weekend of protests (May 2): people are screaming “freedom”. Canadian flags are used and abused. Police arrests, civil disobedience and leaders brandishing megaphones. Another challenge for Ottawa and its long-suffering citizens and businesses. Really already seen again.

“Rolling Thunder” was just another flashy thunderbolt in the name of freedom to protest imaginary nonsense and trouble. When I turn off the news, I turn off this meowing crowd.

Re, We Should Rethink Defense Spending (Opinion, April 30): During the Cold War, the forces of NATO and the Soviet Union were in rough balance. Since then, 15 states have left Moscow’s embrace for NATO. Ukraine wants to follow.

NATO forces have modernized their tactics and morale is good, the opposite of Russia’s. Since 1987, NATO’s eastern border has shrunk from 2,000 kilometers west of Moscow to less than 1,000 kilometers.

The addition of Finland and Sweden to NATO, damage to the Russian military in Ukraine, sanctions and population decline ensure that NATO’s military superiority over Russia continues to grow. .

The Russians know their history: repeated invasions by Sweden, France, Germany, Great Britain, the United States and even Canada. Psychologists and pest controllers might also question the strategy of waving bigger sticks at a cornered, paranoid rat. What there should be are real talks and diplomacy – that means compromise.

Is NATO ready or does it want a complete victory over Vladimir Putin?

Why Germany is looking to Canada for its future hydrogen supply (Report on Business, April 26): Our NATO allies are making great sacrifices by banning or drastically reducing reliance on Russian fuel. We should immediately increase our oil and gas production and bring it to market. How can we Canadians, in good conscience, allow these resources, which we have in abundance, to remain in the ground while we watch in horror the atrocities in Ukraine?

Can we study the feasibility of transporting crude oil from Alberta and Saskatchewan by rail to Churchill, Man., then by ship to Europe and also to refineries in New Brunswick? We should also increase our gas production in Newfoundland and Labrador.

Ecologists need to understand that fossil fuels will be burned (in decreasing amounts, over time) regardless of where they come from. They may claim that we are contributing to global warming, but we would be meeting an essential need in Europe – just as oil and gas are still essential in Canada.

On Canada Lagging the U.S. on Forced Labor Seizures (May 2): Canada’s deplorable record on Chinese forced labor products entering the country is sad, but it shouldn’t surprise.

There has been a lot of fanfare about new regulations, specifically related to the interception of products from the Uyghur-populated region of China. However, reading these regulations makes it clear to me that they were designed to produce no results.

While Canada emphasizes human rights for Syrians, Afghans and Rohingyas, it seems to be business first when it comes to significant trade. Canadian prime ministers since Pierre Trudeau have had strong affiliations with China.

The Canada Border Services Agency should not be blamed. It implements the instructions issued by the government. The identification and seizure of goods is a byzantine process and the staff is often minimal. If there are seizures, there is probably no transparent reporting.

Canada’s 2021 Census: The Country’s Changing Demographics (April 28): Health care experts lament that despite already large spending, health care spending is set to increase dramatically as our population ages, and our only way out is to spend smarter and not necessarily more.

After 40 years of family practice, I’ve come to the sad conclusion that all of my patients will eventually die, no matter how much they spend on health care – or whether their last days are spent in hospital or at home with good home care. I also find that for a number of older patients, quality of life outweighs lengthening the last days or months of an already long life.

We should stop being a death denying society. Accept that the death of a child or young person is tragic, but death at the end of a long life is inevitable.

Canada’s older population should demand more investment in children, not less. Developing the full potential of every child should be an economic and social need, as well as an ethical responsibility.

The current review of how Canada implements children’s rights sheds light on how they can fall through the cracks. We can no longer afford to let this happen.

This should mean that more attention is paid to child-centred policy at all levels of government.

Kathy Vandergrift Past President, Canadian Coalition for the Rights of Children; Ottawa

The public-private partnership used for this project touted the effectiveness of private financing of major public infrastructure. The public was assured that risk transfer meant that the private sector would take responsibility for any cost overruns.

Canadian banks are not buying this line. They are suing the provincial agency responsible for awarding the project, proving to me once again that when it comes to privatizing public projects, the risk is rarely transferred – it rests, as always, with the government.

Four officer cadets found dead at the Royal Military College in Kingston (April 30): What a terrible tragedy. Such incidents always recall a line from the English poet John Milton’s elegy, Lycideswritten in 1637 to mourn the accidental death by drowning at sea of ​​his promising young friend Edward King, who was about to embark on a career as a clergyman.

“For Lycidas is dead, dead before his peak.” There are always so many questions about the fragility of life, and so few answers. But it is a time of mourning that we share with the families of the cadets and all they touched.

Letters to the editor must be exclusive to The Globe and Mail. Include your name, address and daytime phone number. Try to limit letters to less than 150 words. Letters may be edited for length and clarity. To send a letter by e-mail, click here: [email protected]

Putin doesn’t care how many Russians are killed | Letters