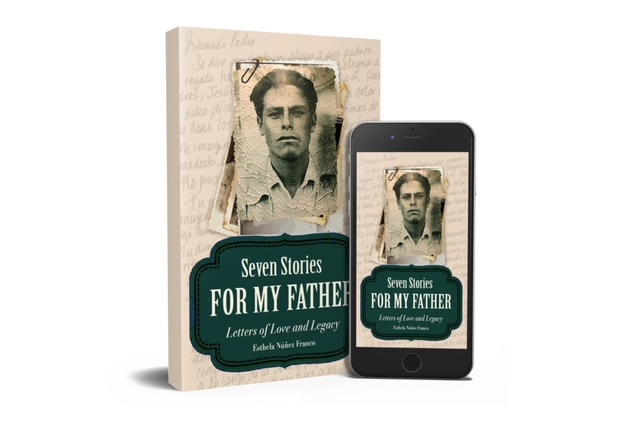 There is a special bond between mothers and sons and fathers and daughters that cannot be explained. Although we love both of our parents, there is just something special about the relationship between a mother and son or father and daughter that creates memories that last a lifetime.

University of Northern Colorado alumnus Esthela Nunez Franco pays tribute to that bond she has with her father through a new book, “Seven Stories For My Father: Letters of Love and Legacy.”

When Franco’s father was diagnosed with dementia, it prompted her to write a tribute to him, detailing the impact he had on her life and career to the public.

“It was emotional but it’s also like a celebration for my father because it gives me seven decades of memories,” Franco said.

The book is expected to be published in the coming weeks.

Franco moved from Mexico to the United States with his parents when he was 10 years old.

“We came to Sterling because at that time that was where the work was and we had family raised there,” she explained. “So it was easier for us to go to a place where there was family and work. All three of us had to leave Mexico for a better life.

As with many immigrants, adjusting to life in a new country was difficult for Franco.

“It was horrible, it was a time before ESL. The kids now have an easier transition,” Franco said. “Coming to a small town, a small neighborhood where I didn’t know anyone, it was horrible. But I had great teachers and without my English and art teachers, I don’t know what I would have done.

In addition to what she calls “Dad’s Book”, Franco has written and published four children’s books: “BreezyGirl”, “Breezy & Esthela with Friends: Coloring and Activity Book”, “A Day with Mom” ​​and ” Grandpa is Happy”. His fifth children’s book, “My Uncle Is Sick,” is due out later this spring.

In “My Uncle Is Sick,” Franco teaches children what it can be like to lose a loved one or friend to food. Again, the book is based on Franco’s personal experience.

Franco uses giraffes as characters to honor his son, Jacob, who died at a young age.

“My son has a baby giraffe on his plot, and I just said if I was going to start a family, I didn’t want it to be an illustration of a human,” Franco said. “There are so many different meanings for giraffes, they stand tall, they are unique.”

“All the books are based on my own life and they happen to be children’s books,” Franco said. “Really, I tell the story of my life, but they are illustrated in different ways.”

The transition from writing children’s books to memoirs for adults caused Franco to take a different mindset with his writing and delve into raw, unexposed feelings.

“You can always hide behind a children’s book. Children’s books are very common, very frequent. There are tons of books on tons of different subjects,” she said. “But when I wrote the memoirs, it’s like putting a mirror in front of you. It’s like going into a dressing room and not liking how we look. In writing a memoir, or anything that reflects your life, you are looking at yourself in the mirror.

While writing the tribute to his father took just a weekend, Franco’s personal memoir, “Wisdom, Love, and True Grit,” became the biggest challenge of his writing career. .

“I’ve been trying to do this for two years. It’s a weird dynamic when you’re writing a memoir,” she said. “I really appreciate the intimacy you find with yourself, your decisions and your courage.”

Franco’s books are available in print or electronically in English and Spanish through Amazon, Barnes and Noble and its website, www.esthelanunezfranco.com. To reserve a copy of “Seven Stories for My Father: Letters of Love and Legacy,” contact Franco at (970) 371-8856.

For more information on Franco, his books and his current projects, visit www.esthelanunezfranco.com.

Letters: Non-judicial seizures could be a slippery slope; Rights of co-owners weakened by the boards; Gender stereotypes in the cover of Kealoha

Can modern furniture work in a 16th century farmhouse?