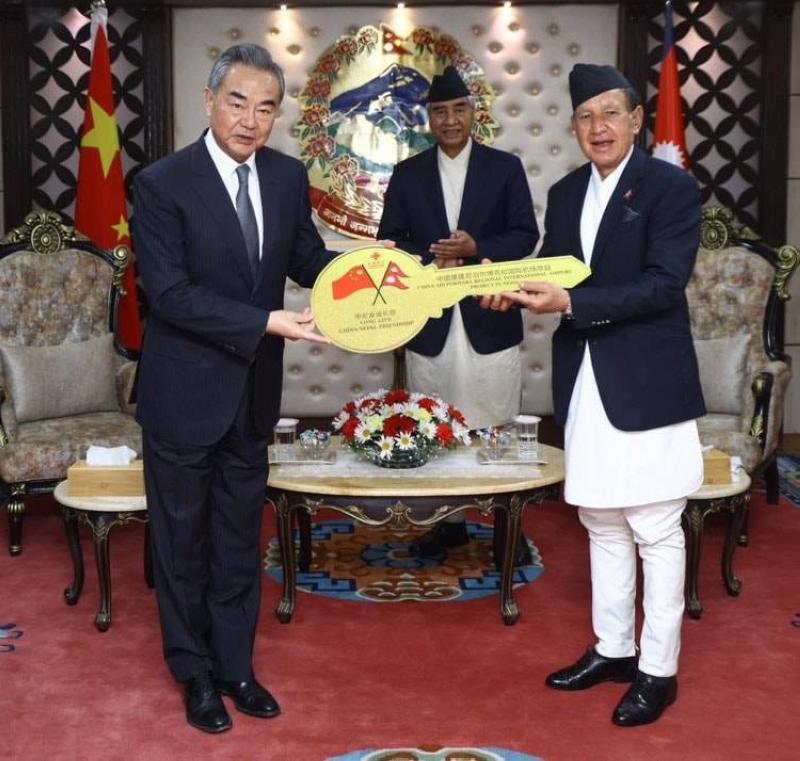 The two ministers discussed all important aspects of Nepal-China relations and cooperation, according to a press release issued by the Foreign Ministry. The two sides stressed the importance of regular exchange of high-level visits to enhance mutual trust and further consolidate Nepal-China relations.

Foreign Minister Khadka reiterated Nepal’s commitment to the “one China policy” and not to allow any anti-China activity on Nepalese territory.

Both sides reaffirmed their support for each other’s sovereignty, territorial integrity and national independence.

Khadka appreciated the Chinese government’s continued support for Nepal’s development efforts and thanked the Chinese side for completing development projects such as the Araniko Highway Long-Term Maintenance Project (Phase III) and the Pokhara International Regional Airport.

The two foreign ministers also stressed the need for concerted efforts to accelerate the execution of ongoing projects as well as to implement the agreements and understandings reached between the two countries during high-level visits.

Chinese Foreign Minister Wang has assured the development assistance pledged to Nepal by President Xi Jinping during his state visit in October 2019.

The two foreign ministers stressed the need for continued partnership to overcome the challenges of the COVID-19 pandemic and focus on COVID-19 response and recovery.

The two sides also focused on issues related to trade, investment and tourism. They stressed the need to fully operationalize the Tatopani-Zhangmu and Rasuwagadi-Kerung border ports for the two-way movement of goods between Nepal and China. The two ministers instructed their competent authorities to work together to this end.

With a view to promoting tourism and people-to-people contacts between the two countries, the two foreign ministers agreed to resume, at the earliest, passenger air services suspended due to the COVID-19 pandemic.

Wang assured Khadka of the Chinese government’s full cooperation to facilitate the return of Nepalese students to China for further study as a matter of priority and agreed to start the process at the earliest.

At the end of the bilateral talks, the two foreign ministers witnessed the signing and exchange of nine agreements and documents: economic and technical cooperation agreement, technical assistance program for the feasibility of Chinese aid , study of the China-Nepal cross-border railway project, cooperation agreement on the feasibility study of the interconnection of the Nepal-China electricity network, protocol on the safety and health conditions for the export of haylage from Nepal to the China, Exchange of Letters on Duty Free Treatment to be Granted by China to Goods of Nepalese Origin Covering 98 Percent 100 Tariff Lines, Araniko Highway Maintenance Project (Phase III) Certificate Issue and Trial of the seventh meeting between Nepal and China on strengthening cooperation in the railway sector.

Similarly, the agreements also include a protocol on dispatching a Chinese medical team to work in Nepal at BP Koirala Memorial Cancer Hospital, delivery and certificate of acceptance of China-assisted COVID-19 vaccine to the Nepal (fifth and sixth batches) of four million Vero cell-based vaccines.

In accordance with the economic and technical cooperation agreement, China has agreed to provide Nepal with a grant of 600 million RMB for the year 2020.

The grant will be used for mutually agreed-upon projects between the two governments.

Later in the day, Wang paid a courtesy call on Prime Minister Sher Bahadur Deuba at his official residence in Baluwatar.

After the courtesy visit, the Chinese Foreign Minister, in the presence of Prime Minister Sher Bahadur Deuba, handed over a model key of Pokhara Regional International Airport to Foreign Minister Khadka during a special ceremony held in Baluwatar to mark the completion of the construction of the airport.

Meanwhile, Minister of Tourism, Culture and Civil Aviation Prem Bahadur Ale handed over the airport completion certificate to the Chinese side during a brief ceremony held in Pokhara.

In the evening, Minister Khadka hosted a dinner in honor of Chinese Foreign Minister Wang Yi and the visiting delegation.

A version of this article appears in the March 27, 2022 printing of The Himalayan Times.

Letters to Readers | The Scottish

Why the “all-male stage” wasn’t