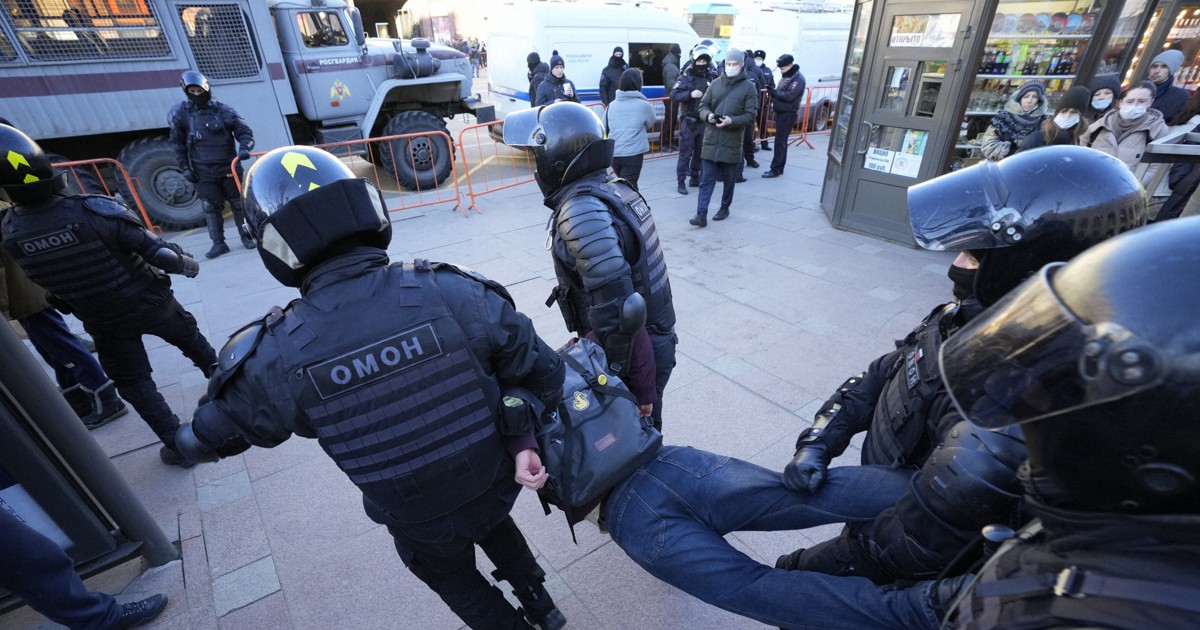 MOSCOW (AP) — From Moscow to Siberia, Russian anti-war activists took to the streets again on Sunday to protest Russia’s invasion of Ukraine, despite police arresting hundreds of protesters daily.

Demonstrators picketed and marched through city centers chanting “No to war!” as President Vladimir Putin ordered Russia’s nuclear deterrent to be put on high alert, upping the ante in the Kremlin’s standoff with the West and stoking fears of nuclear war.

“I have two sons and I don’t want to give them to this damn monster. War is a tragedy for all of us,” Dmitry Maltsev, 48, who joined the rally in St. Petersburg, told The Associated Press. . .

Demonstrations against the invasion began in Russia on Thursday and have continued daily since, even as Russian police moved quickly to quell the rallies and arrest protesters. The Kremlin has sought to play down the protests, insisting that a much larger share of Russians support the assault on Ukraine.

But in addition to street protests, tens of thousands of people in recent days have endorsed open letters and signed petitions condemning the invasion. Celebrities and famous TV personalities have also spoken out against it. An online petition, launched hours after Putin announced the attack, garnered more than 930,000 signatures in four days, becoming one of the most widely supported petitions in Russia in recent years.

In St. Petersburg, where several hundred people gathered in the city center, police in full riot gear grabbed one protester after another and dragged some into police vans, even though the demonstration was peaceful. Footage from Moscow showed police throwing several female protesters to the ground before leading them away.

According to rights group OVD-Info which tracks political arrests, police arrested at least 2,710 Russians in 51 cities for anti-war protests on Sunday, bringing the total of those detained for four days to nearly 6,000. .

Four days into the fighting that left dozens dead, Putin dramatically raised the stakes on Sunday, ordering Russia’s nuclear forces to be on high alert, citing Western countries “taking hostile action against our country in the economic sphere” and “senior officials of the main NATO members have made aggressive statements regarding our country.”

The day before, the United States and its European allies warned that the next round of sanctions could include freezing the Russian Central Bank’s hard currency reserves and cutting Russia off from the SWIFT international payment system. This unprecedented decision could quickly plunge the Russian economy into chaos.

Ordinary Russians fear that harsh sanctions will deal a crippling blow to the country’s economy. Since Thursday, Russians have been flocking to banks and ATMs to withdraw cash, creating long queues and reporting on social media that ATMs are running out of cash.

According to Russia’s Central Bank, Russians withdrew 111 billion rubles (about $1.3 billion) in cash on Thursday alone.

Sunday’s anti-war protests appeared smaller and more dispersed than those on the first day of Russia’s attack on Ukraine, when thousands gathered in Moscow and St Petersburg, but their true scale was hard to gauge and seemed to pick up speed as the day progressed.

Many people in Moscow and St. Petersburg turned out for makeshift memorials to Boris Nemtsov, a leading Russian opposition figure who was shot near the Kremlin on February 27, 2015. Some brought flowers to honor Nemtsov’s memory, while others also held banners in protest. the invasion of Ukraine, only to be stopped minutes after eliminating them.

Nemtsov, one of Russia’s most charismatic opposition figures, was a vocal supporter of the fighting in eastern Ukraine, where Russian-backed separatists have been fighting with Ukrainian forces since 2014 in a dispute interminable which claimed more than 14,000 lives.

The speaker of Russia’s lower house of parliament Vyacheslav Volodin said the anti-war stance of “certain cultural figures” was “inappropriate” and “nothing less than a betrayal of your own people”.

Russia’s communications and media watchdog, Roskomnadzor, on Sunday demanded that Google lift restrictions on YouTube channels run by several Russian state media outlets. The networks rights group noted that Facebook’s refusal to comply with a similar request this week led to restricted access to the platform.

The website of Current Time, a Russian television channel launched by US-funded Radio Free Europe/Radio Liberty that has been critical of the Kremlin, became unavailable on Sunday after the channel reported receiving a notification from Roskomnadzor regarding its blocking.