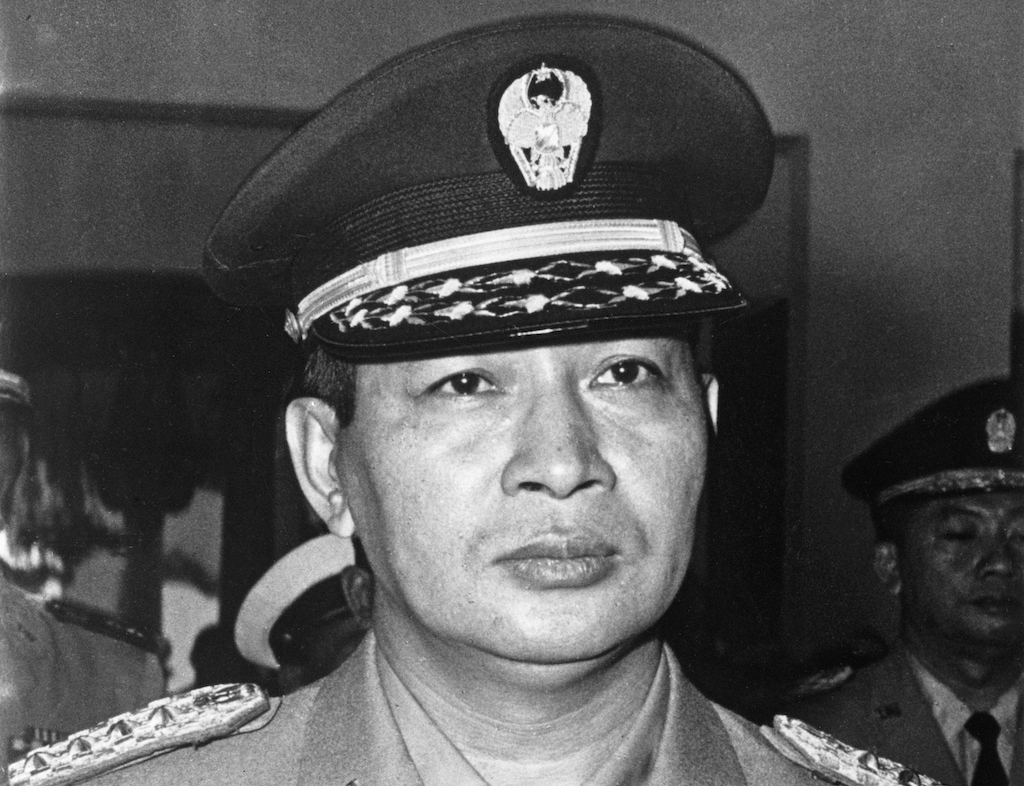 In late 1964 and into 1965, there were rumors of a so-called Council of Generals of Right-wing Generals backed by the CIA. Rumors suggested that they might move against Sukarno. On the night of September 30, a number of mid-level officers, who claimed to act against something like this council of generals, raided the homes of their superiors – half a dozen top generals in Indonesia.

Maybe they were going to kill them, maybe they were going to kidnap them. It seems very likely that the plan was to kidnap these generals and force their hand, but in the raids three of the generals were killed in their homes. Others were taken to an air force base on the outskirts of Jakarta. In the chaos of the raid on the general. [Abdul Haris] At Nasution, the general was able to escape, breaking his ankle jumping over the wall into the nearby Iraqi embassy. However, her five-year-old daughter was injured and would die a few days later.

The generals captured alive and the bodies of the deceased generals were brought to Halim Air Base. Meanwhile, rebel units moved onto the Central Jakarta radio station and broadcast a message, which was heard across Indonesia, saying they were engaged in a coup, but in support for President Sukarno. They condemned their corrupt senior officers.

A number of scholars believe that this was actually an internal military affair that got out of control. But that’s complicated, because the putschists had a small command post at Halim Air Base, in an area known as Lubang Buaya or “crocodile hole” – a sinister-sounding name. We know that Sukarno and PKI chief Aidit were near the airbase. They probably had some knowledge of the coup.

It is unclear exactly what happened, but when the coup failed Sukarno and Aidit fled and the conspirators assassinated the generals they had kidnapped. They took their bodies and threw them in an abandoned well, then they covered the well and planted a banana tree there. The generals were not tortured. Benedict Anderson, the great theoretician of nationalism and himself a specialist in Indonesia, found the autopsy report years later: there were no signs of torture on the bodies of the generals.

Amid all the chaos in the early hours of October 1, a brigadier general, Suharto, who had previously had corruption issues with some of the targeted officers, took charge. Even though General Nasution got ahead of him, he intervened and sent his para-commandos to take over the radio station.

He then moved to the air force base a few days later. He found the bodies in the well and brought in film crews to make it a big media event. The bodies were exhumed and Suharto held state funerals for the generals.

Suharto immediately used this coup as anti-communist propaganda. Was the PKI aware of the coup? Aidit probably knew something about it and may have been implicated in some way, but as far as rank and file PKI members go, absolutely no way. The various organizations such as GERWANI, BTI and LEKRA had no idea. The PKI members were just as confused and surprised as everyone else.

But the army leadership was not confused. They immediately took action and declared the PKI responsible for this coup attempt. They immediately began rounding up and summarily executing members of the PKI and people belonging to related groups. This process started in Aceh, at the far northwestern tip of Sumatra, and then moved across Sumatra.

The white terror campaign spread from west to east, across Java. In West Java, a large number of individuals have been imprisoned. In Central and East Java, the army moved towards PKI strongholds and there was a campaign of mass murder.

Things came to a head in 1966, when the army moved through Java and onto the island of Bali, where perhaps 8% of the island’s population was killed by the Indonesian army and groups. locals who were mobilized to act against members of the PKI. There were also a few sporadic anti-communist killings in eastern Indonesia over the next year. The last military activity against the PKI dates back to 1968.

There was widespread sexual violence against women’s bodies. All kinds of rumors began to spread that the feminist organization GERWANI had been deeply involved in the attack on the generals. They were called witches, prostitutes and worse.

The army spread rumors that GERWANI had prostitutes in Bali with razor blades who were going to attack Indonesian soldiers. Rumors also spread that GERWANI members at the air force base sexually mutilated the generals and cut off their genitals with razor blades. The most grotesque calumnies have been launched against GERWANI.

Within a year, somewhere between half a million and a million Indonesians were killed, possibly more – often by hand.

The bodies were often displayed as a form of anti-communist terror, especially in East Java. Again, this was led by the army leadership. Sometimes they used rank-and-file troops, but they also worked with local organizations, including religious groups: Islamic groups, Christian groups in central Java, and Hindu groups in Bali. The TNI also worked with preman — organized criminals from the underworld. If you’ve seen Joshua Oppenheimer’s film, The act of killingit focuses on some of those underworld figures who served as death squad killers.

Recent research by scholars like Jess Melvin has revealed that the killing program was planned in advance. Speculation now is that this was a program that had been set up in advance and that they were really waiting for the green light – waiting for what John Roosa called a pretext for mass murder.

There was an immediate propaganda campaign. Army newspapers blamed the PKI. There were many stories of sexual torture by GERWANI and stories about these Balinese prostitutes. This indicates a lot of sexual anxiety. The PKI was quickly banned, like all other related political organizations, and the trade union movement was crushed.

Within a year, somewhere between half a million and a million Indonesians were killed, possibly more – often by hand. Even more people than that have been imprisoned for over a decade. Many were not members of the PKI: they were members of feminist groups, union organizers, artists or people who had fallen victim to the death squads due to local political or personal disputes.

Meanwhile, Suharto used this chaos to seize power. He jumped ranks, in front of General Nasution, then began to force President Sukarno to give him power. Suharto represented a very different kind of political figure than Sukarno. If Sukarno was Bung Karno, Suharto was Pak Harto – “Pak” was short for “father” or “sir”. He was much more dignified and refined, with a distant and aristocratic air.

He regularly moved against Sukarno. On March 11, 1966, he forced Sukarno to cede all power to him. The document Sukarno allegedly signed to legitimize Suharto’s takeover may have been a forgery. Two years later, on March 27, 1968, Suharto became Indonesia’s second president, officially replacing Sukarno.

He instituted what became known as the New Order. I don’t think the reference to Nazi terminology is accidental. The New Order was based on a centralized military regime and a decades-long anti-Communist propaganda program, which continued to promote the great lie of the PKI’s guilt – the idea that the PKI had murdered the generals and was going to launch an attack on the Indonesian nation, which is not true. The PKI had no significant military component. But this big lie was at the heart of the New Order regime.

Under Suharto’s New Order, it was impossible for an independent social movement to form. The unions were completely crushed.

There was no discussion of mass murder. Those who survived the murder, who were imprisoned but released after around a decade, faced enormous discrimination, both for themselves and their families, for being associated with the PKI. GERWANI members have also faced such discrimination due to the propaganda campaign. Under the New Order, it was impossible for an independent social movement to form. The unions were completely crushed.

NBC’s new show ‘The Courtship’: what is it? When is it premiering?

Letter to the Editor: What’s My Line?