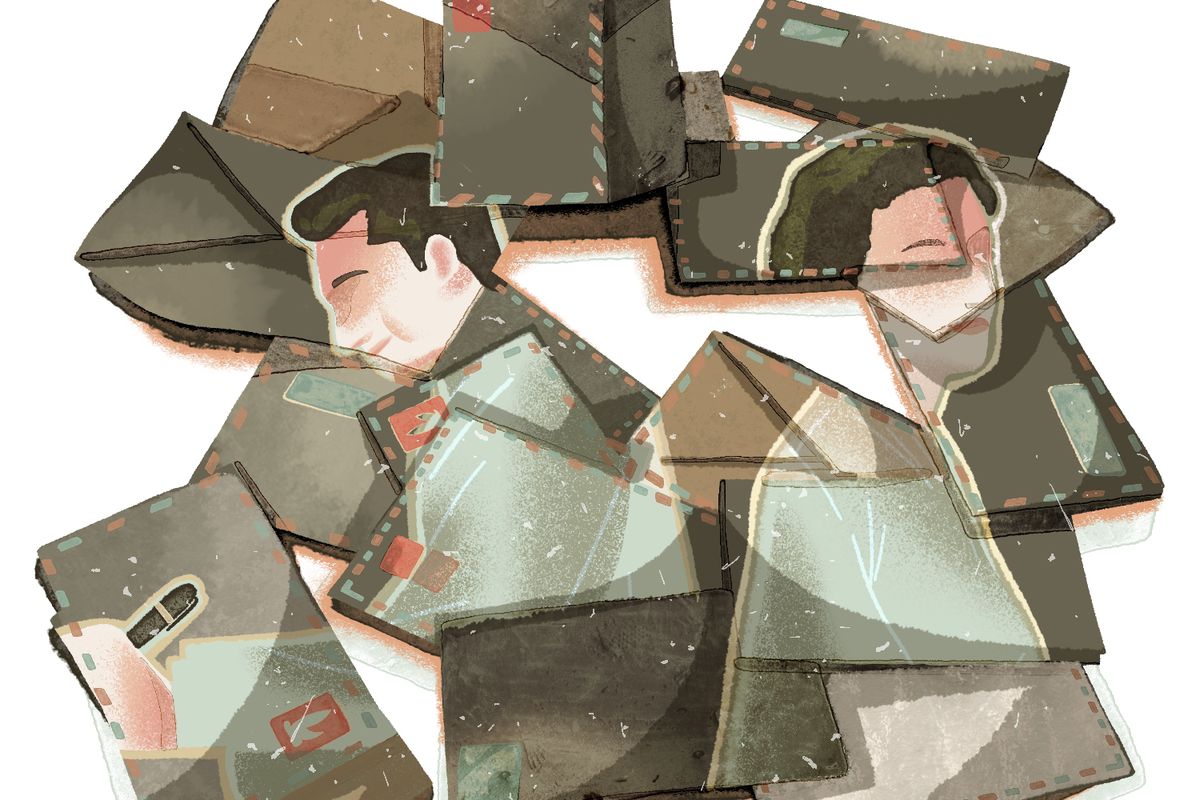 The First Person is a daily personal piece submitted by readers. Do you have a story to tell? See our guidelines on tgam.ca/essayguide.

Stories of lovers separated by COVID-19 lockdowns remind me of my English mother and my Dutch father during World War II. Joyce and Andrew met in 1937 while they were both vacationing in the Swiss Alps. Their mutual attraction deepened when my father visited England over the next two years. They wrote letters to each other frequently, signed at first simply with “Best to you”, but later with “With all my love”.

After the declaration of war between Britain and Germany in September 1939, postal service to and from the Netherlands became erratic. My parents started numbering each envelope so they could track ones that were lost or delayed for months. Censors often opened letters, painting strips of blue wash on the paper to detect invisible ink, and noting the censor’s identification number in pencil at the top. Joyce was upset that others could read her deepest personal feelings, but Andrew took a more light-hearted approach. Realizing that a number of exchanges had passed through the hands of the Censor 1663, he imagined that the man must compile a collection of their love letters.

Life during the war was not easy for either of them. The trade dried up and Andrew was made redundant by his import/export company in Amsterdam. He found work with a utility group in The Hague, but train travel was slow, crowded and unreliable. His mother was exhausted from queuing all day with coupons to buy the food needed for an extended family of six.. Joyce was also subjected to rationing in London where she worked as a radiographer (x-ray technician) at Barts Hospital. When she wrote my dad about butter restrictions, he arranged to send his family a kilo of Dutch butter by post.

In their letters, my parents debated the relative merits of possibly making a life together in the UK or the Netherlands. Joyce started learning Dutch from a book so she could communicate with my father’s family; then she took lessons from the wife of an exiled Dutch government minister. Meanwhile, Andrew was studying English to the level where he would be qualified to teach in high school; later he also qualified as a translator.

Desperate to see each other again, they made plans for Joyce to visit neutral Holland in June 1940. Just weeks before he left, the Netherlands was invaded during the Blitzkrieg and occupied by German forces. For the next five years, my parents lived 400 kilometers apart, separated less by the North Sea than by war.

For four months after the capitulation of Holland, they had no news of each other. Eventually, communication was possible thanks to the Red Cross providing special forms for personal 25-word messages. They later managed to send letters through a Red Cross mailbox in Lisbon or through an acquaintance in Zurich who sometimes added their own happy greetings to the bottom of their personal notes. Even though the texts were still censored, my father used certain code words. “Violins” meant radio sets, strictly controlled by the Germans who had banned the viewing of English newscasts and “Ben” meant the BBC. “My brother and his wife brought me a violin to borrow as they each had one of their own,” my father wrote. “I often train with Ben.”

In May 1945, after months of disruption, the war in Europe ended. Joyce sent Andrew two long letters full of her plans. The Dutch government had agreed to send him to Holland “very, very soon” to help with the mass X-ray screening of the population for tuberculosis. (The Dutch had suffered terribly from starvation in the winter of 1944-45 and were at great risk of contracting tuberculosis. Like others during that winter, my father had tried to eat tulip bulbs although found them “nauseous after the first few times”.)

Much to my mother’s dismay, both of her letters were returned to her with the words “No Service.” She hadn’t heard from Andrew for months although she had asked five or six friends or acquaintances who were traveling to Holland to try to find Andrew and pass on the news to him. Despite her concern about making a fool of herself, she bravely sent a telegram announcing her expected date of arrival. My father was overjoyed and went to the airport to welcome her with precious strawberries and cherries, but did not find Joyce: her papers had not arrived in time. Fortunately, he met a sympathetic RAF officer who agreed to act as a middleman and carry letters back and forth.

It wasn’t until July 1945 that my mother finally landed in Eindhoven, her duty station, which happened to be where my father was working at the time. Even after he was transferred to Amsterdam, my mother managed to visit him by hitchhiking in Canadian military vehicles, sitting on the soldiers’ laps in the taxi and making his way through military checkpoints. showing the papers of his radiographer.

In June 1946 my father and mother married in England and took up residence in Amsterdam. Six years later, they and their two small children (my brother and myself) boarded a ship for Africa where my father had been offered a management position in his former trading company. As the Cold War deepened in the 1950s, many believed that hostilities might break out again in Europe, this time between the Soviet Union and the US-led Western democracies. At least in Africa, my parents had never had to fear being separated again by war.

Register for the Parenting & Relationships weekly newsletter for news and tips to help you be a better parent, partner, friend, family member or colleague.

The return of 2010s fashion: lessons from the decade