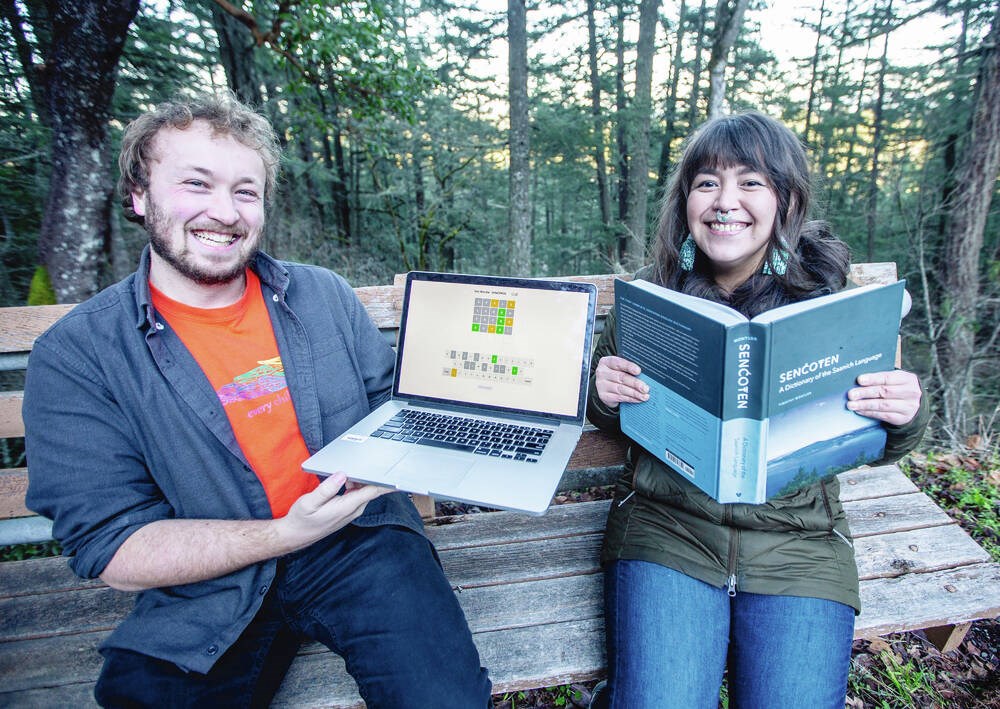 Like millions around the world, Catherine Blackstock is addicted to a game where you try to guess the daily five-letter word.

When she finally got a green square in the Wordle-like game – which gives you six tries to guess the predetermined word of the day and lets you know when you’ve placed a letter in the right place by making that space green – “he was so exciting,” she said.

Blackstock, a hereditary chief of the Gitxsan Nation in northwestern British Columbia, does not play in English. She uses a version of the game that was created for her own language.

Blackstock had never tried the original English version when she started playing in the native Gitksan language, but she quickly became enthusiastic about the game, which she played every day for about a week. This helps Blackstock achieve its goal of spending 15 minutes a day on Gitksan.

“It’s another way to wake up the tongue,” she says.

She often refers to the Gitksan dictionary while playing, using it once she knows a few letters from the daily puzzle to look up words that include those characters. Delving into the dictionary every day means she often learns new words as she writes the daily word.

Blackstock successfully completed their first puzzle a few days ago, guessing duxwsxw, meaning to run out of something or not have much of something, in four tries. The “xw” together act as a single character and sound like a whisper.

“I didn’t even go to bed until I finished it,” she said. “While I’m doing all this practice and stuff, it comes back to me looking at the words and what they mean and, you know, just this reminder.”

The Gitksan Wordle was created by Victorian software developer and linguist Aidan Pine, who has worked on several language revitalization projects, including as a developer on a University of British Columbia project to create a dictionary app for Gitksan language.

The original Wordle was created by a Brooklyn software engineer, Josh Wardle, and was designed for his partner, a word game lover. It released the game globally in October, and it quickly became a global phenomenon as social media feeds filled with colorful grids showing player results.

Pine played with open source code created by another developer to create a version adaptable to any language. He plugged in a list of Gitksan words and adjusted the alphabet to allow Gitksan characters.

“What I hear is that people are excited to look up words in the dictionary. It gets people thinking about language every day,” he said.

After posting the Gitksan version online, Pine was contacted by someone in Brentwood Bay interested in a version for speakers of SENĆOŦEN, the language of the W̱SÁNEĆ people of the Saanich Peninsula.

Like Blackstock, PEPAḴIYE (pronounced Puh-pah-key-uh) quickly became obsessed with the game. It became the first thing she does in the day, enjoying it with her morning coffee and an open dictionary. .

The code Pine wrote to create a Wordle adaptable to any language is available for others to use, and already someone has started working on a Hawaiian version. He also wrote a blog post to walk people through the steps of creating their own version, which could be used by other developers or “a very enthusiastic type of tech-savvy person”, he said. declared. “I’m a big fan of more people getting involved in this.”

While he recognizes that games like Wordle can help language learners, Pine said it’s important to remember that technology isn’t what keeps languages ​​alive.

“People revitalize languages ​​through hard work and determination. And if little games like this can help or make things easier, that’s great.

Pine’s code to adapt Wordle to any language: github.com/roedoejet/AnyLanguage-Wordle