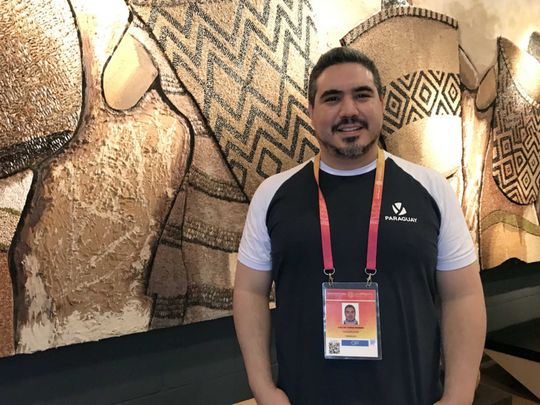 Meet the Paraguayan polyglot who impresses at Expo 2020 Dubai

He greets visitors and explains the contents of the pavilion in six languages, including Arabic, Spanish, English, French, Portuguese and his mother tongue, Guarani.

â€œAnd because the theme of Expo 2020 Dubai is ‘Connecting Minds, Creating the Future’, what better way to connect with people than to speak in their own language. I wanted to bring multilingual attention to the pavilion, â€he added.

It was the connection that made a good impression with visitors. Romero, a lodge guide, saying “Welcome to the Paraguay lodge” in Arabic, Spanish, English, French, Portuguese or Guarani put them at ease and it was also a clue that they can ask questions. without any language barrier.

â€œArab visitors are quite surprised to see a Latino who has never been to the Middle East before speaking good Arabic,â€ Romero noted, adding: â€œAnd because they are surprised they become more curious and inquisitive. and I take that as a clue to continue the conversation and explain all the contents of the Paraguay Pavilion to them.

â€œBut it is also a two-way process as I am always very happy to speak with Emiratis and other Arab visitors as it gives me the opportunity to practice and improve my Arabic,â€ he continued. .

With the help of books, the internet and whatever other sources of learning he could find, Romero said he learned Arabic on his own when he was only 14 years old. .

He said: â€œThe official languages â€‹â€‹in Paraguay are Spanish and Guarani. At school, we were taught English, French, Portuguese. I learned Arabic on my own because I was really inspired by the stories about the desert and the camels of my Argentinian grandmother, whose father was Spanish and had Arab origins from Morocco.

â€œMy great-grandparents were from Asturias, a region in northwestern Spain. They were Muslims who converted to Christianity so they could stay in Spain hundreds of years ago, â€Romero said.

After tracing his roots back, Romero devoted himself to learning more about Arabic culture and its language.

â€œAt the beginning, it was really difficult to learn Arabic, it’s completely different from Spanish. In Latin America, we prefer to learn English, Portuguese or French. Spanish words are pronounced light in the mouth; Gaurani is mainly nasal, but Arabic is mainly throaty – and this is the biggest challenge for non-native Arabic speakers, â€he explained.

From Carlos to Khaled

Romero, born in Asuncion, the capital of Paraguay, said: â€œI have always loved Arab culture. After learning more about the Arabic language, I finally studied Islam – its history, doctrines and faith. And because I learned more about it, I converted to Islam in 2007 and took the name Khaled.

Romero plans to do his Hajj someday. Currently, he works for the Ministry of Foreign Affairs of Paraguay, in the administrative department of consular affairs. He is also part of the National Commission for Refugees, as an interpreter for Arabic speakers, French speakers and Portuguese speakers during interviews with asylum seekers.

Before coming to Dubai for the Expo, Romero said he helps newly converted Muslims with their Arabic lessons once a week. He will resume this work on his return to Paraguay after the Expo.

Romero noted that he was part of Expo 2020 Dubai, exposed him to more languages â€‹â€‹and cultures to learn. After the Expo, he said: â€œI will not stop learning other languages. Speaking a different language is like discovering a whole new world. A new language can connect you with new cultures. It opens you up to new experiences and stories.

Always curious in mind, he also wishes to improve his knowledge of other languages, including Chinese, Russian, Turkish and Hebrew. He also wants to read and write Sanskrit, Latin, Aramaic and Cyrillic (Russian alphabet).