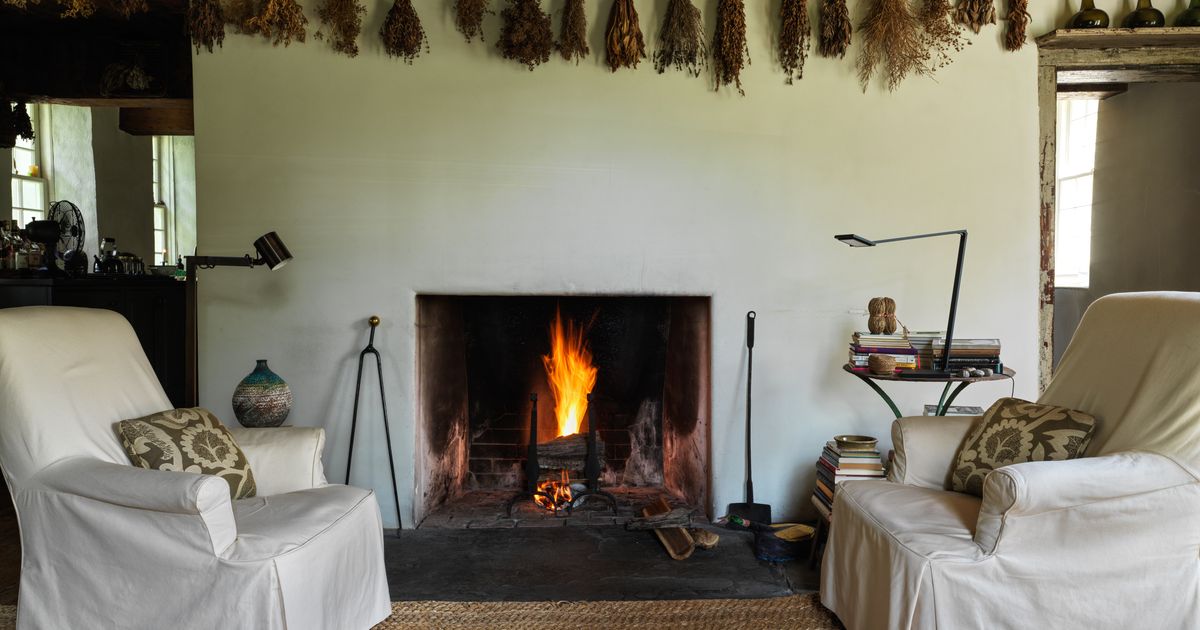 Visit a 1720s home in the Hudson Valley

The living room: Napoleon III armchairs by Niall Smith frame the fireplace. The couple plastered the walls, which featured “a hideous faux stone,” says Robert Turner. â€œThe dried herbs come from our garden, and the rugs in the living room and dining room are English-apple-apple rugs that need frequent watering to keep them soft. The ceramic vase on the left is by Peter Speliopoulos.
Photo: Chris Mottalini

They must have been very big, â€said Robert Turner of the original owners of this nearly 300-year-old stone house overlooking a Hudson Valley cove that he and his partner, Pierre Speliopoulos, bought three decades ago. â€œBecause normally in these Dutch houses I would hit my head on every beam. This one has unusually high ceilings.

Turner and Speliopoulos took a while to renovate the place beyond ridding the interior of the stenciled hearts and wreaths, added by the previous owner, which were a bit too quaint for their liking. Restoration and renovation work began in 1995 with architect Jim Joseph from Hottenroth + Joseph Architects. The couple reconfigured the second floor, carving out space in the hallway to create a guest bedroom (which some visitors said is haunted) and built an addition that included a library, entrance hall, and a second bathroom.

â€œThere is something wonderful about preserving a historic house,â€ says Speliopoulos. â€œAnd yet, not to live the old-fashioned way. We tried to clean that up and bring him back to his original bones, preserving his spirit. It’s a very simple house, but I think it has a very nice quality, a soul.

They searched for antiques to decorate it in nearby Hudson and Rhinebeck, as well as New York City merchants, picking up fine English gateleg and taste tables and a Louis XVI daybed, among other finds. Their 18th century cabinet, known as the kas, could have belonged to the Dutch family who built the house.

Turner was a fashion editor at Vogue and fashion director at Harper’s Bazaar before working with decorator David Easton; then he started his own interior design business in 1995. These days he focuses on philanthropy, serving on the executive committee of the Metropolitan Opera’s board of directors and helping to support the Santa Fe Opera, the Carnegie Hall, the High Line and bam. He also signed the new opera Eurydice, by composer Matthew Aucoin, which premiered at the Met on November 23.

Speliopoulos, for his part, designed for Laura Biagiotti in Rome and for Christian Dior in Paris, and he was Creative Director for Donna Karan New York from 2002 to 2015. He has worked for 21 years with dancer and choreographer Karole Armitage, design costumes for his ballets. He has been exploring ceramics for ten years.

Their home was used for weekends and holidays until the pandemic hit and they settled in full time. Speliopoulos has created a pottery workshop in the cellar. The months spent there produced a work for his show last summer at Ateliers Courbet, “Chthonic”. The title refers to Greek deities who inhabit the underworld, “deep in the earth and emerging,” says Speliopoulos, “and I felt like it was parallel to the life we â€‹â€‹were living during the pandemic. There was all this darkness and uncertainty and fear, and then as we started to see light at the end of the tunnel I felt these were optimistic signs of rebirth.

The terrace: Added to the lower level of the house, where Speliopoulos did his workshop in the cellar.

The cave: Terracotta vases in the workshop of Speliopoulos.

The library: It is centered on a table with English legs covered with an old carpet from Uzbekistan.

The end of the library includes a Louis XVI daybed covered in French linen fabric; on the wall, flanking the Flemish mirror, are oval portraits of English carriages painted on tin.

The guest room : â€œMany guests who have slept in this room say it is haunted,â€ says Turner.

The staircase: These stairs lead to the master bedroom and the guest bedroom on the second floor.

Work of Speliopoulos: Chthonian vessel 16, slipped and glazed stoneware, is thrown to the wheel with handcrafted appendages.

A group of ceramic sculptures, part of the recent â€œChthonicâ€ exhibition by Speliopoulos on a mantelpiece.

Speliopoulos in the living room.

Editor-in-Chief Wendy Goodman takes you to the city’s most exciting homes and design studios.


By submitting your email, you agree to our terms and Privacy notice and to receive e-mail correspondence from us.

Letter: No more reasons to worry about our outer harbor | Letters

COVID-19 variants familiarize us all with Greek letters

Here’s our pick of 5 standout works at TEFAF Maastricht, from a million dollar…

Christie’s adds up its carbon footprint of NFTs

The Art of the Deal: South Korean Millennials Trade Stock for Art | News Arts and…