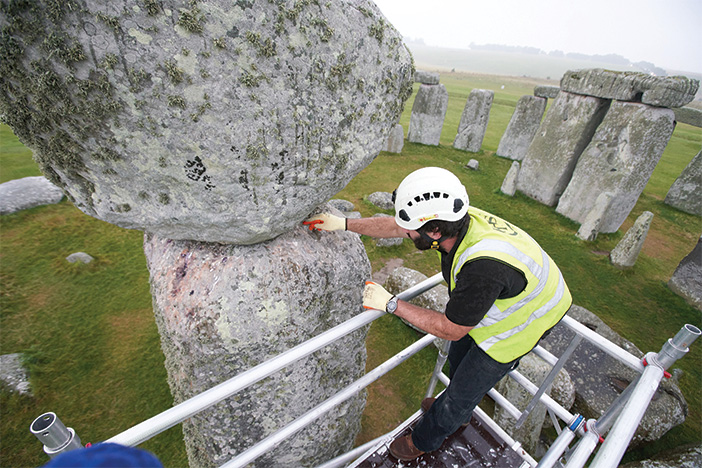 This fall, specialists worked to conserve some of the Stonehenge sarsens, the latest in a series of initiatives dating back to the dawn of the 20th century. Carly Hilts spoke to Heather Sebire to find out more.

Visitors to Stonehenge in September may have noticed a surprisingly modern addition to the Neolithic monument: a movable scaffolding tower. This fall saw one of the most significant conservation projects to take place at the site in over six decades, aimed at protecting the stones from erosion as well as reversing some of the effects of well-intentioned but ultimately damaging repairs. carried out more than half a century earlier.

The recent conservation work stems from two previous research: a laser study of the monument and a detailed report by an engineer. The old initiative saw high-resolution scans undertaken in 2012, during Stonehenge’s first full laser survey. This was intended to help record and assess the condition of the stones, but also revealed that the prehistoric graffiti that was first identified at the site in the 1950s was much more extensive than previously thought. Some 71 hitherto unknown sculptures of ax heads resembling artefacts known from the early Bronze Age (circa 1750-1500 BC to date (see CA 273). These analyzes were also an essential tool to help English Heritage, of which Stonehenge is responsible, to identify any cracks or other erosion in the stones.

The other key piece of the research was a study conducted in 2018, led by Professor David Nash of the University of Brighton, which saw chemical analysis used to determine where the Stonehenge sarsens were mined. Sarens, added to Stonehenge around 2500 BC. . Unlike the smaller blue stones, which were traced in the Preseli region of West Wales (CA 366, 345 and 311), and the sandstone altar stone, which originates from the east from Wales, the Sarens are rather more local in origin, having been traced to West Woods in the Marlborough Downs, about 25 miles north of Stonehenge (CA 367). Nash’s research also enabled English Heritage to conduct a more comprehensive examination of the state of conservation of the stones.

“At the same time that the scaffolding was ready for this chemical analysis, we took the opportunity to ask the engineers at Historic England to report on the stability of the stones, especially the horizontal lintels, as they had no not been examined in years. ‘explained Dr Heather Sebire, senior property curator at Stonehenge. The good news was there was nothing structural to do – we weren’t worried about the lintels falling off or anything like that – but the report did highlight some problems associated with repairs to the frames. 1950s and 1960s, when they used a very hard mortar that we wouldn’t use today.

Historical repairs have particularly affected the joints between the lintels and their supporting uprights. These towering constructions represent an impressive feat of prehistoric engineering: with each sarsen measuring up to 9 m in height and weighing up to 30 tonnes, they fit together using an impressive system of studs and bolt holes. protruding mortise, while the lintels themselves interlock. using tongue-and-groove joints reminiscent of woodworking. However, when the stones were last restored over half a century ago, many of these joints had been wrapped with hard mortar which is not breathable. As the material degrades over time, it leaves the stones vulnerable to damage from trapped moisture which freezes and expands in cracks, causing erosion.

To counter this, English Heritage brought in specialists from Sally Strachey Historic Conservation to remove the old mortar and fill the joints with breathable lime mortar, allowing water to escape. Two conservators used a scaffold tower to access the tops of the stones to complete this work, and they also examined the skyward surfaces of each of the nine lintels that are still in place, looking for any naturally formed holes that might be large or deep enough to form puddles. It is hoped that these efforts, combined with regular monitoring in the future, will allow the stones to withstand the forces of wind and weather for many years to come.

This is an excerpt from an article in California 380. Keep reading in the magazine (click here to subscribe) or on our new website, The past, which details all of the magazine’s content. At The Past you can read each article in its entirety as well as the content of our other magazines, Current World Archeology, Neck brace, and Military history questions.