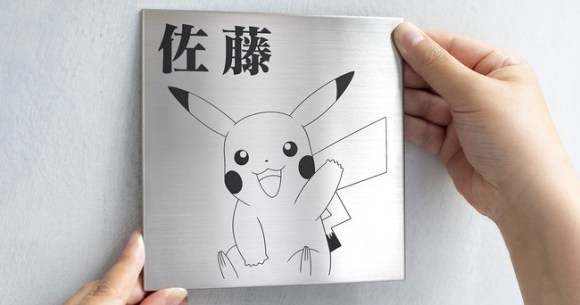 Pokémon at your doorstep! Japanese house hyosatsu marks your house with your name and your favorite Pokémon

30 Gen-1 Pokémon Are Ready To Literally Be A Part Of Your Home.

Postal addresses in Japan are numbered in the order in which the buildings in a block were constructed. Therefore, Building 1 and Building 2 may not necessarily be side by side. This can make it difficult for delivery people and visitors to find your place, so it is customary to put a plaque with your name on it, called a hyosatsu, next to the main entrance to your house.

a hyosatsu with the last name of the owners

Originally hyosatsu were simple, utilitarian signs, but in modern times many people want something a little more stylish or individualized, as the sign is sort of a symbol of your home. And really, what could be more elegant than yours Hyosatsu Pokémon?

Pikachu welcomes you to the Sato family home.

Some time ago a Japanese company Hankos started making personal seals (the Japanese equivalent of a signature on legal documents) with Pokémon on them. The line was a huge success, but customers started asking if the My Name / My Favorite Pokémon concept could be extended to hyosatsu, and now Hankos is ready to take that step.

They start where the series did, by Pokemon Kanto region, with 30 of the most popular Gen-1 pocket monster species.

You don’t have to use Japanese text either.. Since each sign is made to order, you can get your own with letters from the Latin alphabet instead.

▼ It is not uncommon for Japanese owners to opt for the alphabetical rendering of their name on their hyosatsu if they want a chic and contemporary look.

In addition to your choice of Pokémon, you can also select either silver or black as primary color.

A photo of Mewtwo near the front door seems like another great way to keep junk mail out of your mailbox.

Since Hyosatsu Pokémon are designed to be set up outdoors and exposed to the elements, they are made from sturdy stainless steel. However, nothing prevents you from hanging one on the wall inside your home as an interior decoration.

And for a final touch of personalization, you have 12 fonts (six Japanese and six alphabets) to choose from.

Officially called Pokemon signs, they can be ordered online through Rakuten (money here, priced at 17,380 yen [US$159], and black here, at 19,850 yen). And if your favorite species isn’t in that initial group, don’t despair, as it wouldn’t come as a shock if Hankos extended the lineup to more Pokédex members before long.

Source: Public relations time
Top image: PR time
Insert images: SoraNews24, PR Times, Rakuten
● Do you want to know the latest articles from SoraNews24 as soon as they are published? Follow us on Facebook and Twitter!