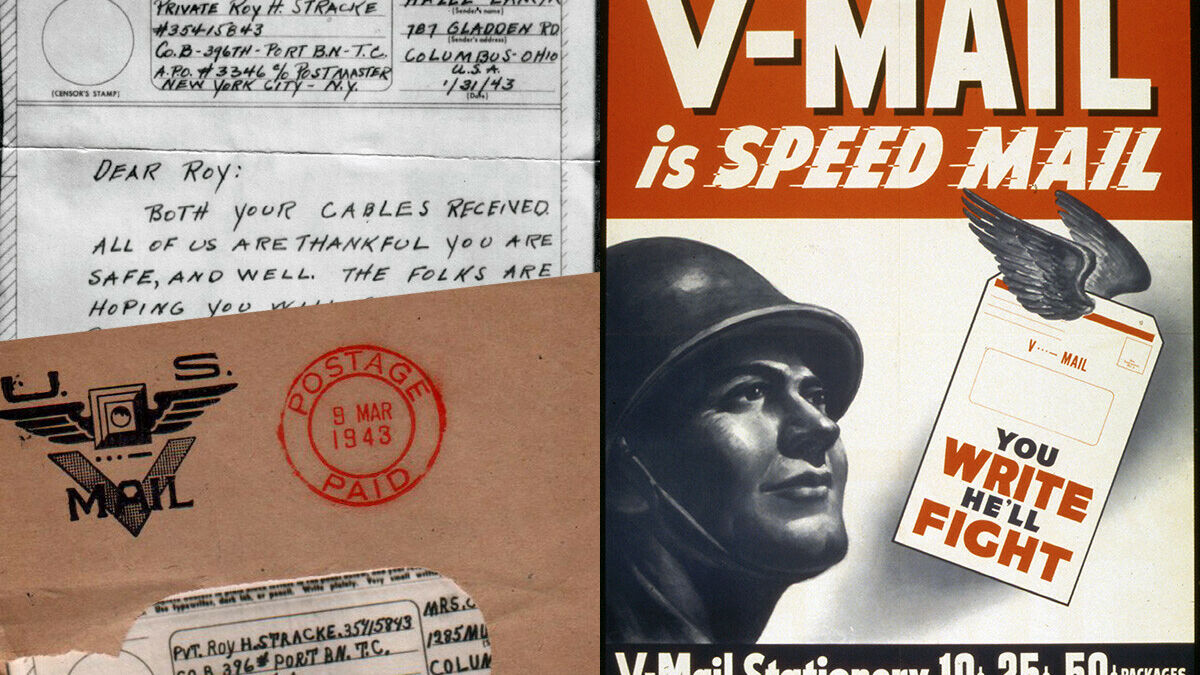 Letters, Lost and Found – collect pieces of history from a …

recover pieces of history from a real estate sale

V FOR VICTORY. During World War II, over a billion letters were sent to and from the United States military via V-Mail, a system whereby letters were copied onto film to reduce their size, and then reprinted when they have arrived at their destination. (Image source: Wikimedia Commons)

The letters lay on an ottoman on the second floor of the house where there was a real estate sale. Curious, I picked them up, and as soon as I looked at the dates on the letters, I decided to ask about them. No price tag came with them. Old chandeliers and furniture, paintings and figurines didn’t appeal to me, but these letters did. I paid $ 2 for the set of 10 and left with my treasure: letters dated 1942 thru 1945. One of the letters was only 4 inches by 5 inches with the word “V-mail” at the top .

By doing some research, I discovered that the “V” stood for “victory” and that in early 1942 the military used these pieces of paper for the military to write letters at home. The hyphen in the V-mail sentence was printed as three dots and a dash, signifying victory. A small box on the top contained the recipient’s address. The letter from a serviceman was approved by a censor and photographed on 16mm black and white photographic film. From there, the reel was shipped or airlifted to a fulfillment center near the recipient’s general location, reduced to a 4-by-5-inch piece of black and white photographic paper, and placed in a mailbag for delivery. . This process saved space for larger shipments. During World War II, more than a billion V-mail letters were processed, according to the US Postal Service. The Victory Letter shares the news that The Red Cross gave us a Christmas box with candy, cigarettes and a few other things in it. A sentence begins Some of the guys have a couple – and here the words are crossed out, probably by a censor, and illegible. And I imagine a melancholy man who hope he will be back by next Christmas.

Another letter dated February 1944 says that a man obtained his induction papers and had to pass a medical examination in June. This letter from one woman to another says: So if he succeeds he will also have to go to war. The tone seemed neutral. As I read the letter, I thought of the millions of women who have been left behind, unsure whether their son, husband or lover will return. I wondered if this man had returned to his family.

Once an elderly couple was present as their belongings were sold. I had to leave because I couldn’t bear to watch them watch their possessions sell, one by one. I knew their rocker once rocked a baby of theirs; I was sure that this mother and grandmother had served many meals on the offered dishes.

Some letters come from a young woman at a nursing school in Chicago. She writes during her long night shift, anticipating final tests and a future internship at a children’s hospital where the children are all under the age of 14. She, too, asks about a man coming home on leave.

Fortunately, there are no â€œDear Johnâ€ letters.

Many letters start the same way, How are you? Ok I hope. English and business teachers would cringe. But the letters always show the thirst for news – information. Have you heard from Juanita? How is Carole? Have you been home lately? How does Marvin behave now that you’ve tied him up and fenced him in? How did you spend the holidays? And always a plea for someone to rewrite. They don’t care that all letters start the same way.

The discovery of these letters made me think of real estate sales in general. Going to real estate sales is a strange business. I feel like walking into a house uninvited and sometimes wonder what the owner would think. Usually the owner is deceased or now resides in a retirement home or with a son or daughter. I often leave with a small room because my house has long been furnished with larger rooms. And strangely, I remember the house, if not the person, where each room came from. There is the Roseville vase from a small house on the east hill of Chippewa Falls, the Italian lamp from a doctor’s house on the west hill, and a set of poems by Robert Browning from a nearby town. No wonder my decoration is called eclectic. Often this is needlework – either a framed sampler or needlepoint pillow or embroidered pillow cases. I can’t stand the idea of â€‹â€‹leaving something in the dumpster that someone has been working on for months or years. There is a framed Christmas poinsettia embroidery that someone dared to price at just $ 3. I just had to save him because the sale was almost over, and I just knew it would be thrown away. Once an elderly couple was present as their belongings were sold. I had to leave because I couldn’t bear to watch them watch their possessions sell, one by one. I knew their rocker once rocked a baby of theirs; I was sure that this mother and grandmother had served many meals on the offered dishes. Better not to know what happens to your possessions that you once prized, dusted and sat in. I remember this every time my husband tells me that my real estate sale will last three days with the ladies from the church serving lunch on the lawn.

These letters that I have now are written on old tablet paper that once cost 5 cents for an entire block, or it’s the little note-shaped coin that was photographed and printed. I will keep them in a file. Maybe in the years to come someone will find them and wonder why someone kept a small piece the size of a today’s ticket. Maybe the person will read them, research the V-mail article and decide that they are worth keeping. I hope.

Connie Russell lives with her husband, Tim, on Lake Wissota where she reads, writes and works with Friends of the Library.

Let the little ones have fun, say Hyderabad parents – the New Indian Express

Lawmakers urged to protect cloud data like other personal data